A few years ago a religious group became active in Albanian villages, and began teaching people a message that unfortunately did not ring true with God’s Word. Their message was that the world was corrupt and evil, and there was no hope, and it is just better to go to heaven than to stay on earth. That message became a devastating harbinger of death as three children in three different areas of Albania committed suicide as a direct result of believing this message. Understandably, this outraged Albanians toward this particular religious group, and set in motion a scrutiny against all other groups for many years to come. The sadness is that although the world truly has evil in it, there is hope, and that hope is through Jesus Christ and His message of God’s love and forgiveness. 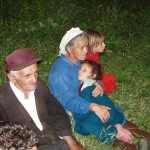 During the years that I was part of Jesus Film teams (see previous posts), the year following these children’s suicides was particularly challenging. My son, Jeff, was part of my team, and in every village we went into we had to prove that we were not part of that religious “cult” before the people  would welcome us  into their village. This was a new development, because before, even though the people of the village may not have always cared about our film about Jesus, they were at least hospitable, and usually welcomed us into their homes. This year, however, the conversation with the mayor or “first man” of the village would start with a recounting of these suicides, and a firm warning that if we were part of that cult, then we could just keep on walking. In our case, just our word that we were not part of the cult was sufficient, and we were welcomed. 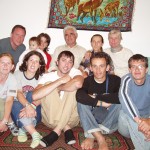 In a village were we spent several days, we had built up a good relationship with the people of the village including the mayor and his family, in whose home we stayed. We had showed the Jesus Film the first night using our generator, and projecting the film on a screen out in a sheep pasture. Some people were interested, and some were not, but I was able to spend a great deal of time with the mayor, answering his questions, and sharing in more detail what the life of Jesus was all about. 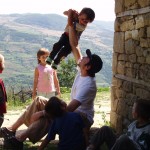 The question of the cult never came up again between us and the villagers until one morning during our team meeting one of my Albanian partners informed me that an Orthodox priest in another village had heard that we were in this village, and that we were part of the cult, and he was coming to drive us out of the valley. We spent quite a bit of time praying about this, and then went on about the business of the day. One of the cultural habits that Albanians have, is taking a break in the middle of the afternoon for three to four hours, which usually includes a nap after lunch. Typically in the villages, people get up very early in the cool of the morning, often before sunrise, and work in the fields or with their flocks, and then come in around one o’clock for the break. Afterward they will go back out in the cool of the evening and work till nearly dark.

On this day, Jeff and I had been resting on the front porch of the mayor’s home, over looking a beautiful panorama of mountains and valleys. The terrain was steep, and we could see small villages perched on the sides of the mountains across from us and up and down the valley, but even though the villages seemed close enough to hit with a rock if thrown, it would still take two to three hours to actually hike to them. As the people in the village started stirring again for the evenings activities, one of our Albanian partners came up to us and told us that an Orthodox priest had ridden his horse from across the valley and was talking to the mayor about kicking us out.

I knew I had to meet with the priest, but I didn’t blame him for wanting us gone if he thought he was protecting his flock. I grabbed my Albanian Bible, and I walked down the dirt trail with Jeff. One of the villagers had made his home into a small café/bar by placing a plastic table out in his front yard under a tree. There the mayor and the priest were sitting talking, and when I strode down the path the priest eyed me suspiciously. He was the perfect stereotype of a Greek Orthodox priest. He wore a long black robe, had a black stovepipe hat, and a bushy beard. His horse was tethered to a bush along side of the path. By the priest’s glare I knew I was in for a fight.

I said a quick prayer, and walked through the gate, and shook the mayor’s hand with a greeting as he stood up. I then went to the priest and stood in front of him and offered my hand with as big of a smile as I could muster, and greeted him with the traditional Albanian litany, of “Mirë mbrema, Si jeni. Mirë? Po, Unë jam mirë, falemnderit.” Which means, “Good evening, how are you? Yes, I am good, thank you.” The priest rose from his seat and took my hand, but his reservations were clearly etched on his face. We sat down and chatted for a few minutes, as is the custom, because no matter how upset you might be with someone, you never proceed with the conversation without finding out how they and their family, and their friends are doing. After the preliminaries, the priest got right to the point and accused us of being members of the cult that had persuaded small children to take their own lives. I assured him that I was not part of that cult, and I placed my Albanian Bible on the table between us. The cover had a collage of photos, and seeing his eyes widen, I realized he recognized it.

“That is the same as my Bible,” he said. I said, “Yes, it is the same one you have there.” I then opened up to the Book of John and showed him the first chapter. We both knew that the cult had completely rewritten that first chapter, and when he saw that my Bible matched his, I could tell he relaxed. I told him we were just here to tell the story of Jesus, and that we had shown a film about the life of Jesus based on the Book of Luke. He said he had seen the film, and quickly changed his tone from accusing to accepting. After a while he sat back in his chair, and tapped the table top with his hand, and said, “So, we believe the same.” “Yes,” I said. He then slammed his hand down on the table top, and exclaimed, “So, we are brothers!” We all nodded and smiled. Then he said with a laugh, “OK, we will drink beer now.” 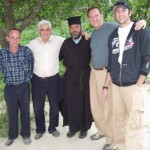 Spiro and I became friends that afternoon, and after exchanging phone numbers, and sending cordial greetings to each other’s families, he got on his horse and rode back across the valley to his own village. I got a kick out of the fact that even his name, Spiro, fit my stereotype of a Greek Orthodox priest. Jeff, who had remained silent through the whole exchange, had a wry smile on his face as Spiro on his horse clopped down the winding mountain path. He and gave me a nod of approval, and the two of us stared after the priest until his black stovepipe hat disappeared beyond the hill. Without taking my eyes off the horizon I said, “Just don’t expect this at home.” He said with a chuckle, “What?” I said, “Drinking beer while telling someone about Jesus.” Jeff said, “OK. Well… we’ll see.”

May God bless you until next time!