Albania, Turkey, Kazakhstan, Liberia, Kenya, and my own Backyard

Growing up, I was part of a  very active Boy Scout troop. We camped every month regardless of the weather. We made our own rope, lashed and thrashed together our own bridges and towers, and we were absolutely dependent on well tied knots. One of my scout leaders was a World War Two United States Navy veteran, who was most emphatic that our knots were not only tied properly, but also were the proper knot for the occasion. More than once my sensitive spirit was bruised when while presenting an incorrectly tied knot to my leader, he would pull it apart and tell me to do it again, but “This time the right way!” On one occasion I was sure I had tied the right knot the right way only to have him look over my shoulder, and ask me if I really believed that knot would save my life if I had to depend on it. Tears streamed down my face as I, once again realized that the knot I had so confidently tied would only unravel after any tension was placed on it. My scout leader never let me get away with a bad knot. I eventually became a very good knot manipulator under his constant tutelage. Out of all the things I learned in scouts the importance of a properly utilized, and properly tied knot has stood out above all the rest. It has been a valuable lesson that I have carried with me on every mission trip I have ever taken. I now have an armamentarium of nearly hundred knots that, yes, have saved my life, saved my equipment, saved time, and energy, and given me a certain peace of mind.

Unfortunately, because of my tearful past, an attitude of  lofty impatience has been created in me that can only be described as “Knot snobbery”. It irks me when I see knots not properly utilized. It twists my guts to see knots haphazardly cinched, and it really frays my longanimity when good lengths of rope are abused with poorly designed hitches. The horror of watching a length of rope being insidiously contrived by someone trying to tie down a tarp with exhausting wrapping, and endless looping and thrashing only to have to cut it later with a knife because the Medusa ball they have created is impossible to unlash, and straighten is often more than I can bear… 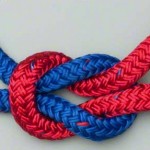 Of course, I am being factious, but the point is, knowing how to tie a few good knots can save you time, energy, rope, and maybe even your life. For instance, one of the easiest and first knots we learn is the Square knot. Do you know the difference between a good Square knot and a Granny knot? A Square knot will hold until dooms day, but a Granny knot will slip and unravel at the first sign of tension. All knots that are tied properly have a definite pattern and symmetry to them—even the most complex. If your knot looks like a plate of spaghetti, it probably has been tied wrong. It may hold for the purpose in which it was intended, but the time it takes to unravel it, or worse, cut and ruin the rope is a needless waste.

Besides the obvious uses for a good knot—tying a clothesline, staking out a tent, repelling or climbing a rock, mooring a boat, dragging a pole, tying your own shoes—some tasks are actually made possible, or at least easier when a length of rope is properly used. A case in point is, one day when I was on a Jesus Film team (see previous posts) in Albania, our team was resting for the afternoon on top of a high hill under the shade of a grove of trees above the village we were staying in. The people of the village had been very hospitable, and over the course of the afternoon the villagers brought up to us the abundance of their watermelon harvest. There was only five of us on our team, but that afternoon we were given thirteen watermelons. We ate two of them, but when it came time for us to go back down into the village, we not only had our gear, we now also had eleven extra watermelons. We couldn’t just leave them behind because they had been thoughtfully given to us as gifts. Did you 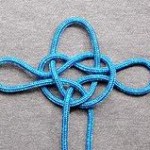 know that there is such a thing as a Jury Mast Knot. One of its uses was by sailors to tie up cannon balls so they could carry several at a time. Some good Jury Mast Knots became very good “watermelon knots” that day, and we were able to transport all eleven watermelons plus our gear back down the hill in one trip instead of having to trudge back up, and then down to retrieve our bounty.

It should go without saying that in order to tie a good knot you have to BE PREPARED, and actually have a length of rope with you. I never travel without having at least fifty feet of braided nylon rope. It is strong, light weight, and the more tension on it the stronger the knot becomes. I can’t remember a single mission trip I have taken, where I didn’t use my rope for some purpose or another. There are upward of a thousand recognized knots used for many occasions, so the best approach is to learn a few of your favorites. A great resource is Des Pawson’s, The Handbook of Knots, from DK Publishing. I am not going to reproduce what he has written, but I will give you an idea of 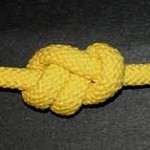 some of the more useful knots that I have used. Knots can be categorized in groups depending on type and usage. There are Stopper Knots used to keep rope ends from fraying, or slipping through, oh… say a hole in a tarp, or to provide a handhold for climbing. My favorites are the Overhand and the Stevedore Knots. A Stevedore is a dock worker. Another Category is Binding Knots, such as Sailors Cross, Square, Thief, and Clove Hitch. For Hitch Knots I like the Cow Hitch which is used to tie a rope to a ring. A Taught-line Hitch can be used to tighten up the guy lines of a tent.

A Highwayman’s Knot, which is used to tie a horse’s reins to a post. A 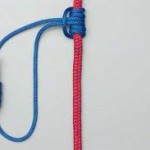 Prusik Hitch, is a climbers knot used to bind a sling to a main rope, and a Sheepshank designed to shorten a rope or relieve strain on a worn part of the rope. Bend Knots are used to join two lengths of rope together. I Like the Sheet Bend, used to tie two ropes together of unequal diameter. And then there are Loop knots, which can be tied

around objects, or a pole, someone’s waist. The Loop knots I use the most are the Bowline, and the Jury Mast Knot (Cannon ball/water melon) knots.

My daughter, Aubrey recently ran into an old high school friend she hadn’t seen in years. He was one of the kids that hung out at our home on a regular basis with a bunch of other friends. Aubrey found it hilarious that he remembered her crazy dad, me, occasionally coming into the room with a length of rope and saying, “Hey, let me show you guys a new knot.” They would humor me, and over the course of time I probably taught them eight to ten useful knots. That was nearly ten years ago, and he still remembers.

Knot tying can be useful for everyday life, and is actually quite relaxing, and fun. So next time you feel stressed pull out your length of rope, your how-to guide, sit back and tie a few hitches. It could save your life someday. God Bless You until next time!