Ever since I was a kid I have enjoyed gazing at the stars. I knew many of the constellations by name, and would often point them out to friends and family who may, or may not have really been that interested. Of course, being from America, I have been gazing at constellations in the northern hemisphere, but I had almost no knowledge of the constellations of the Southern Hemisphere. I had heard of the Southern Cross, but had only seen a glimpse of it on my previous trips south of the equator in Africa as I was there during the rainy season, and often went days without seeing the sky.

My recent time in Fiji, with my wife Karen, however, showed me just how spectacular the night sky in the southern hemisphere can be. I still didn’t know very much about the constellations, but with the guidance from my friend Don, who lives in New Zealand, I was able to recognize α and β Centauri, along with the Southern Cross. I Googled, and found that by drawing an imaginary line between α and β Centauri, and then drawing a bisecting line from the mid point between those two bright stars to another bright star named Achernar, which happens to be the 10th brightest star in our heavens, and then drawing an imaginary line through the top to bottom star of the Southern Cross until it intersects the first line it will give you the approximate position of the South Pole. 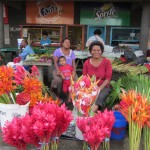 OK, so what does this really have to do with anything? Well, I guess it has to do with the fact that I like to know in what direction I am heading, which brings me, finally, to the point of this story. Karen and I had the opportunity to spend nearly two weeks with our friends Don and Kathryn who live in Auckland, New Zealand. As Regional Director with Campus Crusade for Christ over twenty-one island nations in the South Pacific, Don and Kathryn have the enviable task of working, and living in one of the most beautiful parts of the world. Sharing the good news of God’s love for us—as shown by the sacrifice of His Son Jesus Christ—with students on university campus’ around the world has been, and continues to be a very important part of what Campus Crusade For Christ, or now most recently known as CRU, is all about. 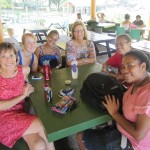 There were a number of things that we were able to accomplish while in Fiji, which I will write about later, but one of the things we were able to do was share the news of God’s love to students on the university campuses in Suva, Fiji. The students, who came from many island nations in the South Pacific, were polite and showed an interest in hearing about Jesus. But one of the things I was most disappointed in was how many students claimed to have a Christian background, but really had no assurance of forgiveness of sins, and the promise of eternal life through Jesus. Most were unsure of what will happen to them when they die. Many believed that because of their behavior they only had a fifty percent chance of going to heaven. For some the percentage was much less. All this points to the fact that they believed they had to work to earn God’s love and forgiveness. Fortunately in God’s Word, The Bible, we are taught that salvation is a gift from God, given to us by grace. As a gift, we can’t earn it or work for it. God did it this way because He knew we could never be good enough on our own, meaning that none of us can boast about how good we are. God wants us to accept His free gift of forgiveness of sins and eternal life through His Son Jesus Christ, and when we do that we can be one hundred percent sure that when we die we are going to go to heaven. There are a lot of verses in the Bible that talk about this, but the one that I used just now is found in the book of Ephesians, the second chapter, and the eighth and ninth verses.

I sat there and listened to the students in the beautiful settings of the South Pacific Islands, and thought that out of all the stress these young people are going through right now—being away from home, in university studying for their futures, taking their final exams—this is one stress that they should not have to worry about. God loves us and has a wonderful plan for our lives. We are not so bad that we are beyond the reach of God’s grace, nor are we so good that we are beyond the need for God’s grace. Believing in our hearts and confessing with our mouths that Jesus is LORD gives us not only forgiveness for our sins and eternal life, but also it gives an amazing peace that surpasses all understanding that we really can have a personal relationship with God. This is God’s desire, that is why He sent Jesus to die on the cross in our place. So it just makes sense to take the gift that is being offered to us.

I am happy to say that many of the students made that choice—as did Karen and I, and Don and Kathryn so many years ago. In all of the commotion of human striving we get distracted, and confused about what is true concerning God’s love for us. We make it harder than what it is supposed to be, and we try to do everything in our own strength, only to find that we fall miserably short of the mark. God knew that about us. He knew that this would happen, so He made the impossible possible by sending His Son Jesus to give us the only way to Him. These students who made the choice to put their faith in Jesus Christ came from various religious backgrounds, but they recognized the right direction when someone pointed it out to them.

Thanks to someone showing me how, I can now not only find north, and thus south in the Northern Hemisphere by the constellations, I can also find south and thus north in the Southern Hemisphere. Marking my barring, and knowing what direction I’m heading is somehow very…reassuring. Knowing that my relationship with God is secure through Jesus Christ is even more so. May God Bless You until next time!