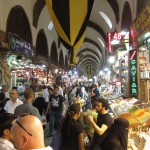 By nature I am the type of person that will not argue over price. If an item is listed for so much money, and if it is something that I want or need, I have a tendency to not fuss over what the vendor is asking for. When I have traveled overseas I often look at something that I want to buy as, 1) being a good deal—meaning I couldn’t get it for that price back home, or 2) it is unique enough that I couldn’t find it back home. But as I have become more experienced in travel I come to realize that sometimes it is not always culturally appropriate to accept the first price.

I have learned what is culturally appropriate from friends who live in the area I am visiting. This is one of the advantages to traveling with a purpose that I so often get to do. I go not as a tourist, but as someone who is providing a service for the people. I get to live in their homes, eat their food, study their ways, and be part of their families at least for a little while. It helps me feel as if I am, at least to a certain extent, part of the inside scene, and not just a by-stander, or spectator.

Like I said, though, by nature I want to give the guy the price he is asking for without giving him a hard time about it. Not wanting to seem like a greedy, over-the-top American comes to mind. There have been times, however, when I have had money in hand ready to pay the first price, or asking price, when I have had my indigenous friends come up and say things like, “Oh, that is too much!”, or “They will not respect you if you give them the first price,” or “They are trying to cheat you”, or “They think you are rich because you are an American, that is why the price is higher for you.” Well, OK… I am not actually rich. I like a good deal as well as the next guy, but what then is culturally appropriate behavior when it comes to the ancient art of haggling?

My first experience of having someone assume I was rich because I was an American came during my first time in Albania. We stopped at a road side kiosk. My Albanian friends  purchased a can of soft drink for the equivalent of fifty cents. When I ordered the same thing it cost me a dollar. My friends chastised the owner for taking advantage of their guest, and shamed him into giving me back fifty cents. I argued that I would have spent a dollar for a can of pop (soda) back home, but my friends assured me that a can of pop does not cost a dollar in Albania, and they couldn’t allow the kiosk owner be dishonest. 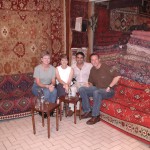 My real lesson in haggling came while I was on a team doing earthquake relief in Turkey. One day our Turkish friends took us to the Bazaar. Turkey is known for its high quality in leather, gold, and carpets. I just happened to really need a new wallet as mine was tearing apart, and I found a really nice sheep leather wallet with a coin purse at one of the leather vendors.  His first price was about thirty-eight million Turkish Lira which was equivalent to about thirty-five U.S. dollars—yes, inflation was terrible after the earthquakes. I thought that thirty-five dollars was a fair price for this nice wallet, and began to pay the man, when my Turkish friend stayed my hand and said,”You cannot pay the first price.” I said, “It’s a nice wallet. I couldn’t get it cheaper in America.” “Yes, but here we never give the first price. He will not respect you if you do.” “OK, so what should I offer?” “Start with 30% of the first price. He will counter, then you will counter, and then he will counter, then you will counter. If he doesn’t counter, walk away. There are other leather dealers.” So I offered the merchant ten dollars. He grimaced and said I was killing him. He countered, though, with thirty dollars. I countered with fifteen. He countered with twenty-five. We agreed on twenty. I was happy. He seemed happy. My friend assured me that the man still made money, so all around it was a good lesson learned.

Another thing I have learned while traveling is that many times a vendor will speak English, but sometimes he will speak only enough English to sell you something. Deviate from the usual haggling script, and you may find yourself up the creek in trying to get your point across. As I have said in previous posts, it is a good idea for Americans to learn at least enough of another language to get by in whatever country they are traveling in. It is a mistake, and arrogant to assume that everyone should speak English in parts of the world where English is not spoken as the first language.

Be warned that not every country will appreciate the haggling starting point of thirty percent of the first price. It is best to learn what is culturally appropriate in whatever region you are traveling in. The local vendors will still expect you to haggle, but the starting point may be quite different, and the outcome may be far from satisfactory. One time when I was in Liberia in west Africa with my daughter, we went to an open air market, and I offered 30% of the first price. The Liberian merchant was so offended that he refused to sell me anything. A few minutes later we joined a Liberian friend who had been in another area of the market and told her what happened. She smiled and said, “We are poor, but we are not stupid. Did you really think he would take 30%?” I said, “OK, so should I just go ahead and pay the asking price?” “Oh no,” she said. “He would think you were stupid if you did. Offer half, and then work up from there.”

On a trip to Nairobi, Kenya, our team had set up a dental and medical clinic in the Mathare Valley slum. One Sunday afternoon when most of the team were resting one of our young men on the medical team, named Alec, went out on his own and bought some local art from a kiosk not far from where we were staying. It was really nice artwork. I asked him what he paid for it. Having bought similar art from another kiosk a day before with a Kenyan friend telling me what was a good price, I found that Alec had paid about ten times more than he should have. It didn’t seem to bother him, because he felt the value was worth it—his nature was very much like mine was at the beginning. When we drove by the kiosk later that day, Alec said, “Here’s the place where I bought the paintings.” Much to his chagrin and our amusement, the kiosk was closed while all other vendors were open. I said, “Alec, you just paid him a years worth of wages. He is probably on vacation now. Mombasa…on the beach.” We all laughed. For the rest of the time we were in Nairobi,though, that kiosk was never open. Two years later my wife, Karen, and I where back in the area—that kiosk was still closed. I wrote Alec and informed him that his generous shopping spree had allowed that guy to retire. Oh well, you can’t put a price on a good time.

May God Bless You until next time!

308 thoughts on “Learning To Haggle With The Best of Them”