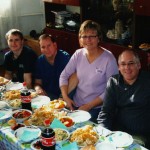 It isn’t often that we get to see a project that we started take on a life of its own, but when we do it makes all the plans and sacrifice well worth it. We live in such a violent, unjust, cruel world that we frequently lament hopelessly that nothing can be done about it. We watch the news, read the paper, listen to the gossip, and before we even know what hits us we find ourselves in despair, and living in fear of our surroundings, feeling that the very worse is yet to come. The biggest part of the problem is that the trouble in our world seems so enormous, and even if we wanted to do something about it we wouldn’t know where to start. But let me just say that in the midst of all this terror there is hope.

Remember the story I shared about the Star Fish. That story did not originate with me, but I shared it as an example of each of us doing whatever we could to make a difference in the world. Check it out. The story is at the top of my blog. The point is, during the times that we feel helpless in changing the bad things going on around us to good things we need to remember that sometimes even a little effort on our part can make a huge difference in someone else’s life, or in the circumstances going on around us. We may not be able to “change the world”, but we can at least try to change the little area we are in. We can make a difference if we try. And if we all of try, then the world could be a better place.

I want to share a really cool story about someone trying to make a difference, and the impact it has had on others. Now this story starts with me, but it continues beyond me, which is the way a good story should be. When Karen and I went to Kazakhstan—stories I have shared in several previous posts—we worked with a young Kazakh dentist named Dr. Igor. I know for all of you Frankenstein fans this is a little too funny, but Dr. Igor was a very important part of our team. Together we set up dental clinics in villages and in orphanages in Kazakhstan. We worked together for nearly two weeks, and also did quite a bit of traveling together to get from one village to another. 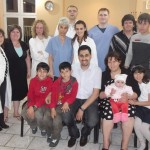 I was able to share techniques, and dental knowledge with Dr. Igor. He had only recently finished his dental training, but his university allowed me to sign off on some of his skills and training for certain procedures. I was very honored to be able to do that, and it was an unexpected pleasure to get to sign my name to his certificates. Our team grew very close in those days, and even though we worked very long and hard hours, I hated to see our time in Kazakhstan end.

I need to do a quick back story. A friend and patient of mine named Mark had asked me to go to Kazakhstan with him. Although he lives in my home town, his ministry frequently takes him to Kazakhstan, and so Mark was actually the team leader to get us to the villages and orphanages. Two weeks before we left for Kazakhstan, Mark was in my office as a patient, and we were talking about the up coming trip. Mark knew that I had a habit of leaving my dental equipment behind for others to use whenever I went to another country for a dental mission. I had already left equipment in Albania and Turkey. We talked about how expensive the equipment is, but that God had blessed me to be able to leave the equipment behind without worrying about the cost. I did tell him, however, that I needed this particular set of equipment for another upcoming trip, and that if I even looked like I was thinking about leaving this equipment in Kazakhstan, he was to kick me in the rump. My equipment is very portable, I call it “donkeyable“, because it can be carried on the back of a donkey. This kind of equipment is very hard to come by in other parts of the world. I found in Turkey during earthquake relief efforts, that portable dental equipment meant to them that it was on castors and could be rolled from one side of the room to another. So my donkeyable equipment was a boon in remote areas.

We had a great time working with Dr. Igor, so at the end of our time he mentioned to Mark that he would love to be able continue to do this kind of dental mission, traveling from orphanage to orphanage. When Mark told me what Dr. Igor had said I knew that it would be impossible for him to go to the orphanages without my kind of equipment, so I told Mark I would leave it for him. Mark said, “Do you remember what you said to me three weeks ago in your office?” I said I did. He said with a smile, and a tone of anticipation in his voice as he looked forward to kicking me in the rump, “Do you still want me to do it?” I said no, I didn’t.

I left the dental equipment with Dr. Igor, and periodically he would send me e-mails showing pictures of he and his wife as she assisted him in the orphanages using the equipment. This last summer, however, I received a real treat, when an e-mail was sent to me showing Dr. Igor and another Kazakh dentist on their first foreign dental mission to the small country of Tajikistan. They were able to take the equipment to the remote mountain villages in this very mountainous central Asian country. From the photographs I could tell they were having just as much fun working together and helping the people as we had had in the orphanages of Kazakhstan. So to that I say “Well done Dr. Igor! Great job! Way to pay it forward!”

You see, when it comes to solving the worlds problems we can’t do everything, but we can do something. And once we start doing something we see that the world is actually full of a whole lot of other people trying to do something, and the problems don’t seem so daunting, and hopeless. Like the little boy said in the Star Fish story, “I made a difference with that one,” as he chucked the star fish back into the sea. God Bless you until next time!

10 thoughts on “A Chance to Pay It Forward”