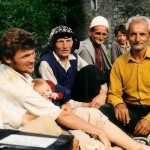 I am going to put my description stories on hold for this post. I recently went to see the movie “Taken 2” with my wife Karen, and my friend, Don who lives in New Zealand visiting us who  I actually met in Albania many years ago. If you haven’t seen it, it is a continuation of the movie “Taken”, which told the story of a man rescuing his teenaged daughter from sex traffickers in Paris who just happened to be Albanians from the region of northern Albania called Tropojë. “Taken 2” now has the father of one of the sex traffickers that Liam Neeson’s character killed in the first movie declaring a blood feud against Liam and his family.

One of the really cool things Karen and I have had the privilege of doing is several years ago we started an “English Club” for Albanians in our hometown. With the help of other American friends, Dennis and Terri, who had been to Albania several times and an Albanian student, Edis who is fluent in English, we were able to have a fairly successful English Club for over five years. So far the distain for the movie by our Albanian friends who were part of our English Club is unanimous. 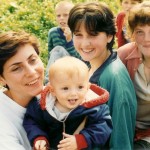 You can’t blame them really. Nearly all of the actors playing Albanians were actually Turks. None of the Albanians, who were depicted as the bad guys in both movies could shoot, fight, or keep a promise. If you have been following my blog over the last several months you will know that I have been to Albania many times, including Tropojë (pronounced Tro-poy-ya). My recent, four part, description stories Village Life were describing a village in the remote northern mountains of Albania in the region of Tropojë. Many of my other stories, Perseverance/Albania, Protection/Albania, The Night of the Chicken, and Yes, Yes, Yes, No, No, No, took place in Tropojë. This region also has a prominent place in my novel, Vale of Shadows. 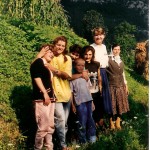 Having said this, I know that Tropojë is a very rough part of the world. The mayor and his family of the Village Life village was part of a gjak marje, or blood feud at the time that I and my team were staying in their home. It started when the mayor’s brother killed another Albanian from the area while both men were in America. The brother was arrested and put in prison, but this did not satisfy the family of the man killed, so the mayor and his family were under constant threat. Another brother of the mayor had been shot, but he didn’t die, so the feud continued on. While we stayed with his family we were closely watched to insure that nothing would happen to us as the mayor’s guests. The mayor said, “It would be better for our whole family to be killed, than for anything to happen to you as our guests.” At the time I really thought that he was just being hospitable in a severe sort of way. The pledge made us feel safer, but only because we were not aware of the gjak marje until the last day or two of our stay. 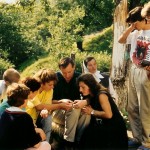 Out of deference for my Albanian friends both here in America, and those living in Albania and other parts of the world, and the wonderful hospitality I and my team received in three different villages in Tropojë, I will try to cast a more suitable light on the people of northern Albania. First of all, however, I will assure you that I am in no way defending the criminal activity that has come out from that area. But what we call criminal in every other part of the world, to some is simply viewed as a way of survival. That part of Albania is very mountainous. Many areas still have no electricity, or running water, or roads wider than a sheep trail. To get a sense of the terrain close your eyes and picture the Colorado Rocky Mountains around Estes Park and Rocky Mountain National Park. Now try to picture that same terrain with no roads, only sheep trails, and small villages perched along the steep slopes, and in the valleys. The Rockies start at about a mile above sea level, and the Balkan Alps start closer to sea level, but the awe inspiring grandeur is similar in both. 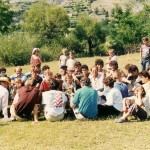 I have described in previous posts what village life is like, but what I haven’t discussed before is the history of that area. Albania is classified as predominately Muslim, and that fact is attributed to the five hundred years that Albania was under the rule of the Ottoman Empire. What is little known by outsiders is that the Ottoman Empire cut a swath through the central part of Albania dividing it into three religious regions. To the north the people were predominately Catholic. To the south they were predominately Greek Orthodox, with Islam being in the middle. In the north the people, Tropojians included, continuously fought against the Ottomans, and although they were engulfed in the Ottoman Empire they didn’t loose their identity. Over time the Ottomans, due largely to the inaccessibility of the mountains, left the northerners to themselves. During World War II, the people in the north fought along side American Rangers, and British Commandos against the Nazi Germans. When the allies won, many in the north wanted to be Democratic, but the country was turned over to one of Tito’s lieutenants, Enver Hoxha, and the country became one of the most oppressive Communist regimes in the world. The northerns, however, fought against the Communist. I stayed in the home of an old man in another village in Tropojë who had fought along side Americans and British against the Germans, and later fought the Communists who captured him when he was a young man, and slit both of his legs up the back of the ankle and calf muscles to hobble him so he couldn’t make so much trouble. He showed me his scars. Even after all those years he still passionately wanted democracy. All this explanation is to give background to the fact that the people of northern Albania have been forced to take care of themselves, and over the centuries have come up with their own brand of justice and taking care of problems. 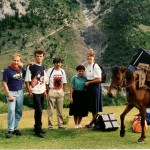 Now back to “Taken 2”, the gjak marje against Liam Neeson would have been executed by the men of the village from which the men killed in Paris came from. More than likely they would have been kin. In the small villages that I stayed in, not just in the provence of Tropojë, most villages had a hundred people or less, and there were usually only three or four last names. So in the scene where Liam’s character has an Albanian thug at gun point in a stand off, and another Albanian comes up and shoots the man in the back as if he didn’t care about him, well that would just have never happened. More than likely the man would have been killing his cousin, and an important fact is that Albanians have very close knit families. It is family above all others.

I am not going to go through the whole movie and nit-pick at every disparaging depiction of Albanians from Tropojë, but I thought that as one of a relatively few number of Americans who has spent a little time there I should at least share with the world that if it were not for the Tropojians making such a wonderful first impression on me with their kindness and hospitality toward strangers, I probably would have never gotten  involved in Albania beyond that first year. It was because of those experiences in the Balkan Alps of northern Albania that I began launching many of my other missions to Turkey, Kazakhstan, Liberia, and Kenya. So I would like to do a “shout out” to any Tropojian reading this that may remember me being in your village—I never forgot you. You changed my life! Shumë Faleminderit!

God Bless You until next time!