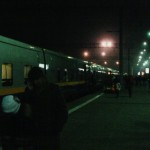 I get a kick out of watching movies that have a scene on the train. The camera shot always makes it look like there is plenty of comfortable room. Whether it is in a sleeper car, or suite, or even in the coach seats no one seems to be too cramped. The scenes shot in the suites are of particular interest to me. You know the ones where a bad guy sneaks in and starts beating up the good guy. They knock each other about a bit, kicking and punching each other across the expanse of the cabin. Suddenly to everyones relief the good guy prevails, and the bad guy is either sprawled out on the floor, or is chucked out the window. I watch those scenes and wonder just what kind of trains these guys are on that seems so amply sized. I guess I unfairly compare these Hollywood trains to the reality of trains in the real world. Or at least to the train I  journeyed on in Kazakhstan.

I am actually thankful for that train. We were able to travel the ten hour route, from Almaty in the southeast part of Kazakhstan to Qaraghandy (Karaganda) in the north central part of the country on a train known as the “Spanish” train, in more comfort than we would have had if we traveled by automobile. It is just that when we were told that we would be making the journey in a sleeper suite I envisioned the opulence I had seen in the movies. One of the very most important axioms of mission traveling is Be flexible! Meaning, you should never count on anything being exactly as you planned it. So flexibility in plans, goals, expectations, and attitudes is very important in order to get the most out of your experience. In the case of the Spanish train we also had to be very physically flexible as well.

Let me just describe our experience, and our endeavor to be flexible. Along with all of our portable dental equipment Karen and I were able to take one suit case apiece to Kazakhstan. We used our extra allowed luggage to transport our supplies and equipment. We traveled with Dwayne and DeAnne, and Mark to Kazakhstan, and then teamed up with Dr. Igor, Luba, and Timor. We were told that we could only take one suitcase per couple for our train in addition to our equipment and supplies. This was not a problem only I thought it was odd since, according to my expectation, we were to have all this extra room.

When we arrived at the train station it was clear to see that this mode of transportation was very popular. We had our tickets and pushed our way out onto the crowded station platform. Mark who had taken this train before continued to push through the crowd, which was difficult with all of our luggage and equipment in tow. Now even though my equipment is portable it still has quite a bit of weight to it, most especially the air compressor we were using. We obtained this compressor in Kazakhstan, which was far more bulky than the portable dental compressor I had brought with me from the U.S.A., but mine didn’t work in a reliable fashion the whole time we were in Kazakhstan due to electrical problems. 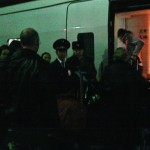 The train sped into the station far faster than I thought that it should, and finally screeched, and grinded to a halt. The train was very long, and our car was way up toward the front. Mark picked up the pace which meant we were running, and pushing through the crowd of travelers who seemed to be content to simply stand in the way. It wasn’t until the train came to a complete stop that everyone else began a frantic scramble to their respective cars. Mark yelled over his shoulder that we had to hurry, and finally we came to the door of our car and hurriedly handed the neatly uniformed, military-esque, uniformed porter our tickets and passports. Mark gave a big sigh of relief, smiled and said, “We only have five minutes.” I didn’t understand what he meant by that until we had squished our way into the narrow corridor of the car, and the doors snapped shut behind us as the train began pulling away from the station. We were packed into that corridor with our luggage and equipment like sardines having barely enough leeway to tug our belongings to our cabin. 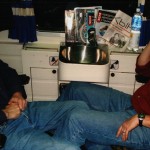 Mark, Dr. Igor, Timor, and Luba crammed into one cabin, and Dwayne, DeAnne, Karen and I crammed into the other. The cabins had two bench seats that faced each other, and a stainless steel sink mounted to the outside wall between the two. The sink was really no bigger than a normal sized laptop computer, which is as it should be considering that the space between the benches was smaller than the size of my size eleven shoe. It was in this space between the two benches that we put our two suitcases, and our share of the equipment. Dwayne and I literally sat across from each other with our knees interlocked just so Karen and DeAnne would be able to sit. I looked around the confines of the apartment and wondered if it would even be possible to get one more thing in here. It was already after eleven at night so we decided to ask the porter to unlock the top bunks and prepare the room for sleep. The benches converted to bunks as well, so with Dwayne and I on the top bunks and Karen and DeAnne on the bottom bunks we were able to stretch out and converse a little more comfortably.

The trip was to take ten hours, which would put us in Karaganda early the next morning. I would like to be able to say how much we enjoyed the beautiful landscape of central Kazakhstan, but the best we could manage was our own reflections against the dark glass. It was early November, but already there was the promise of snow at our destination, which was only about three hundred miles south of Siberia. The farther north we traveled the colder it got within our cabin. We slept with our clothes on for three reasons. 1) It was cold. 2) It was coed. 3) We were to only have five minutes to plunge out of the train the next morning—we didn’t want to take the chance of oversleeping. As it turned out I had little chance of oversleeping as I slept fitfully at best. The rocking of the train from side to side on the tracks meant that we were rocking head to toe, and I never quite got used to that on the trip north. On previous posts I have described the lengthy days we had working in the orphanage, so during the ten hour night trip back to Almaty a few nights later I slept like the dead. I really remember nothing of the train ride back.

As I said earlier we were thankful for the Spanish train. It was the nicer of the two used by the railroad. Just after the light of grey dawn broke  on the morning we returned to Almaty we passed the other train that was in use heading north. There were no sleepers on that train, only benches, and boxcars. If you didn’t get a bench, you stood up the whole trip. It was an austere relic of the old Communist days. Hmm…I think I’ve seen movies with train scenes like that as well. May God Bless you until next time!