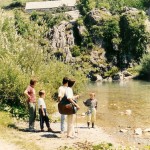 The remoteness of this village in the Balkan Alps of Northern Albania, along with many other like villages, always astonished me. We flew from the river port town of Fierza by helicopter to this village and it took only a few minutes. We traversed the high mountain peaks, the winding ravines and canyons, and the high mountain meadows in the luxury of the Swiss Helimission helicopter, but for the villagers, they were confined by this treacherous geography. For them to venture beyond the territory of their valley it took a great deal of planning and stamina. I have shared in previous posts how difficult it is for them to get basic goods. A four day walk to a highway where they may or may not be able to hitch hike to the nearest town like Fierza. Then a hitch hike back to their trail head—sheep trail—and another four day walk back up into the mountains. I met many people in the mountains that had never traveled beyond the valleys on either side of their valley. They were born, lived, and died all within an area of few square miles 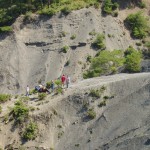 As I said before, the villagers grow just about everything they need to survive, including tobacco. I am not suggesting that tobacco is an essential of life, but if you have ever traveled into Eastern Europe, you will note that smoking is a common pastime. I met a man in that village that had only two teeth left in his mouth. They were an upper right canine, and a lower right canine, opposing each other, and edges were worn flat. The man told me he never wanted to loose those two teeth because they were what he clinched his cigarettes with. Oh, well, the point is that things that they couldn’t grow, or make for themselves went on the shopping list, and someone in the village would make the trek every once in a while and haul it back in a back pack. 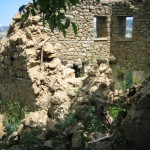 Ok, now to continue with the description story. As it got closer to the time we had told the villagers to meet us up at the school yard to show the film, we headed back to Gjergji’s house to get our equipment. Each team had about 250 pounds worth of film equipment. A long, heavy duty duffle bag contained all of the screen poles, stakes, ropes, and fuel for the generator. Another box contained the 16mm projector. A smaller box contained four  16 mm reels of the Jesus Film, but the heaviest of all was an 800 watt, benzine fueled generator. At first I was very protective of the generator as the perceived possibility of it getting legs and disappearing into the night was pretty high in an area of the world that had no electricity. So I took it upon myself to carry that eighty pound hunk of metal where ever we needed to go, waving off any offer from one of the young Albanian men to carry it. I actually only waved off the offers for the first two times I carried it before deciding that it was better for the young men, who clearly wanted a chance to impress us with their strength, to carry it. Over the years after that on other projects there were always young men in the village eager to demonstrate their prowess without complaint.

This explanation of the equipment leads me to the story of one of the very first times I had seen God answer prayer before I had even finished the prayer. In the evening of that day we carried the equipment from Gjergji’s house about a mile to the promontory in the middle of the valley on which sat the school and the old church building I described in previous posts. Our team carried the equipment along the treacherous narrow path with the stone wall on one side and the steep drop on the other. We crossed the rickety bridge that had gapping holes where planks had broken, a picture of which you can see in the post Village Life – Part Dy, and then skirted the corn field on a path   that followed the stream until we reached the promontory and climbed its steep, and uneven grade. 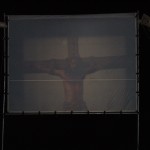 That night the entire village turned out to see the Jesus Film. It was a big deal. None of them had ever experienced anything like this before. We showed the film on the wall of the church building, and then gave people a chance to ask questions, and we gave New Testaments to anyone that wanted one afterward. As it turned out everyone wanted a New Testament. After fifty years of Communism, and a government that declared them an atheist state it was not too surprising that they wanted to learn as much about God as they could. The Bible tells us in the book of Revelation that God created us to worship Him. It is part of our most basic makeup, and if we choose not to worship Him, or are forced not to, it creates in us a void that we will try to fill with anything else that we can. So these people were starving from a spiritual hunger that had lasted for decades. After seeing the film many of the people of the village believed the good news about Jesus and they put their faith in Him, including the mayor, Gjergji. 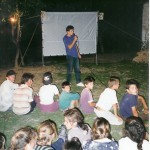 By the time we finished packing all of the equipment it was after eleven o’clock at night. There was no moon, and with the steepness of the surrounding mountains there was not even ambient light along the horizon. In fact it was pitch dark after we turned off the generator. Unfortunately the night before we had loaned all of our flashlights out and so we had no light to illuminate our way along the treacherous path back to Gjergji’s home. I learned a lot that first year. On every project, no matter where it is, I always have several Mag Lights, and extra batteries packed as part of my kit, but this year I and my team found ourselves in utter darkness. As team leader I was concerned about trying to carry all of the equipment the mile back to the house. We contemplated leaving it on the hill until morning, but that didn’t seem like a good idea either. I walked to the edge of the promontory where the uneven path began its descent, and realized that without light it would be very dangerous. A fall could easily result in a broken body part or worse with no hope of getting medical help.

We realized that we should pray for God’s provision, and wisdom, and so our team stood in a circle joining hands. Gjergji and a couple of the others from the village joined our circle, and the thought crossed my mind that this would be a good opportunity for Gjergji to get his first experience in talking to God through prayer. He knew the dangers better than we did, and he was in agreement that it was not good to try and carry the equipment back to his house in the dark, or leave it until morning. We bowed our heads, and our Albanian team mates began praying in Albanian so that Gjergji would understand what we were asking God for. 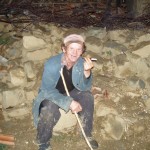 We had no sooner started than Gjergji became very animated and broke from the circle shouting and pointing to the far side of the valley. There, high on the ridge of the mountain to the west was a tiny pinpoint of light. As we stared in that direction we could see that the pinpoint of light was moving, and following the serpentine path of a sheep trail. Gjergji exclaimed, “It must be my cousin bringing back the lantern he borrowed two months ago.” He went on to explain that his cousin lived in a valley on the other side of the mountain, and that it was a four hour walk from his village to Gjergji’s village. As we stood there the light grew larger and larger and before too long Gjergji’s cousin had arrived at the promontory. The cousin said he didn’t know why he decided to bring back the lantern, but he had a sense that Gjergji needed it. Of course the question was, why did he decide to come this day in the middle of the night. He could only shrug. The lantern was battery operated, and illuminated an area about ten feet in diameter. With the light shed by that lantern we were able to safely climb down the promontory, cross the bridge, and make our way along the narrow path to Gjergji’s house.

It was a good lesson for all of us on how God answers prayer. He knew we needed that light long before we did, and he set Gjergji’s cousin on his way hours before so that he would arrive right when we needed it—in the middle of the night. This event not only strengthened Gjergji’s faith, but also my own. I have never doubted since that night that God knows what I need before I ask.

I hope you have enjoyed these four description stories about a day in the life of an Albanian village. God Bless you until next time!