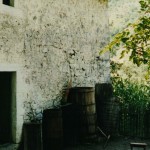 Our hosts name is Gjërgji, and he is the First Man of the village, also known as the mayor. We made it back to his house just as the rain started again. He lead us into his living room, and once again motioned for me to sit next to the fireplace on a sheep skin rug with my back to the wall. Overlaying the rough, wood planked floor was a tattered Oriental style carpet. The walls were slurried, white washed stone. The only decorations were a single sconce full of faded plastic flowers hung high and haphazardly on the wall opposite the windows, and an outdated 1975 wall calendar with a Chinese ink drawing and calligraphy, which had been proudly displayed for nineteen years next to the door. The windows were shut and covered with intricate lace curtains.

The room was stuffy and musty, and I secretly wished Gjërgi would open the windows to allow the cool breeze from the rain to flow through, but this was something that I learned later was almost never done because of fear of catching cold. In a village this high up in the mountains, and so removed from the rest of the world and medicine, a common cold could lead to pneumonia, and death. I, therefore, waited with eager anticipation for the moment when my sweat would actually start to cool me. 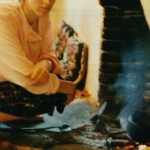 Gjërgi’s wife showed herself for the first time when she entered the room and rolled the short round table that had been leaning up against the wall to the center of the room. She did not greet the men on our team, but made quick, inquisitive eye contact with the women. She left without a word, but soon returned carrying a wedge of dense corn bread in one hand, and a bowl of honey in the other, placing them on the round table called a sofra, which stood about twelve inches off the floor. She then laid out spoons enough for everyone placing the spoon ladle upside down over the edge of the honey bowl with the handles resting against the table top.

The honey was fresh, and had small pieces of the wax comb still in it. We all scooted around the table sitting “Indian” style. The Albanians clearly had more flexibility than I did, and I was amazed how close they could squish under the lip of the sofra. I followed the lead of the other Albanians and ladled out a spoonful of honey and quickly moved it to my mouth trying not to drip as I bent forward over my cumbersome knees. This was my first time in Albania, but it set the stage for many jokes at my expense for many years to come, that being, if you wanted to know what I had eaten in the villages just look at the cuff of my trousers. I had never eaten honey just by itself like that before, but I truly enjoyed it. I thought to myself, “This is a carious lesion just looking for a place to happen.” In dental language that means I wasn’t surprised to see so much tooth decay in the villagers dentition. The corn bread was very dense, and dry, but it was a welcomed adjunct to the pure sweetness of the honey.

We talked for quite a while as it continued to rain. The light in the room went through various phases as the sun periodically peeked from behind the rain clouds before going back behind them. Gjërgi’s wife—I never knew her name, and it seemed inappropriate for me to ask—cleared the table and rolled the sofra back up against the wall. The custom now was to rest in the afternoon, and then begin work again in the cooler evening. Over the years as I continued to go back to this part of the world I began to really appreciate these siestas,  but not so much that I have incorporated them into my daily routine at home. The girls on our team were lead out of the room by Gjërgi’s wife, and taken to the bedroom so they could rest on the couples mattress. Gjërgi left the men to rest on the sheep skin rugs as he went out into the village to take care of “mayor” duties. I used this time to write in my journal, but the rain clouds cast slumber-inducing shadows into the room, and before I knew it I was waking up from a mouth drooling nap of unknown duration.

As I have explained in previous posts many of my mission trips have been to set up dental clinics in remote parts of the world, but my very first mission endeavors were being part of Jesus Film teams in Albania as a volunteer with Campus Crusade for Christ. In this village I was part of a Jesus film team. After our siesta our team left Gjërgi’s house and walked through the village meeting people in their homes, or along the pathways, or in the fields. We invited them to come to the school yard on the promontory in the middle of the valley as the sun was going done. I could have said to meet at 8:30 pm, but as I was the only one with a watch the position of the sun was the method of necessity in determining time. 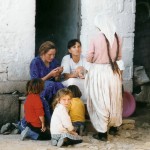 Along with meeting many of the villagers as they were going back out into their fields, we were invited into several homes for coffee. I had never been a coffee drinker, per se, but the coffee I was served in every home quickly pulled me towards the precipice of caffeine addiction. Turkish coffee has no resemblance to the watered down version we drink in America. I literally chewed the thick coffee paste that was barely on the verge of being liquid. To make a long story short, that day I had a total of seven demitasses of Turkish coffee—I didn’t sleep that night!

I found that August is a great month to be in the villages of Albania. The fruit trees are baring, and most importantly the vines are bulging with plump, sweet, juicy grapes. As I mentioned before, most homes had a meshwork of grape vines strung around their front porches and courtyards. It made it very handy to pluck a handful of grapes and pop them into our mouths with the approving nods of our hosts. The pathways would be equally adorned with high borders of mulberry bushes thick with fruit. So many trails were lined with these bushes that the Albanians joked with us that this was Albanian “fast-food.” Over the years I had a lot of Albanian “fast-food” as we trekked between villages. Later, in the years that I was in the central and southern part of the country, I found that August was also a great month for figs. I have to admit my only experience with figs in the past had been freeze dried in packages, so when my team mates or a villager would hand me this plumb, purplish fruit right off the tree, and pantomime that I should split it open with my thumbs, and eat sweet fruit straight off the rind it was a new and pleasant experience that made me want to make sure I always traveled to Albania in August. There were times when I had to go in July, but I always consciously missed having fresh grapes and figs.

Next time I will finish this description with a story about an amazing provision for our team when there appeared to be no hope. God Bless You until next time.