My host described how he had family caught across the border in Serbia. What he meant by that was, when boundary lines were redrawn after World War II parts of Northern Albania were now in Yugoslavia, and his family were no longer on Albanian soil. He wanted to know if I would come and fight along side other Albanians to free them. This was four years before the conflict escalated to war between Kosovaars—ethnic Albanians—and Serbians in the former Yugoslavia. I had been told that to an Albanian, Yes was Yes and No was No, and there was no maybe, so I said flatly, “No, I will not come and fight.” This seemed to satisfy him, so the conversation turned amicably to matters more family oriented. I was a little nervous at first, but he respected the fact that I didn’t vacillate on my answer, so there was no problem. I began to really appreciate Albanians straight forward approach to dealing with issues that concerned them. 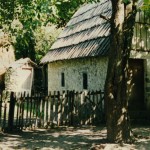 After the strong Turkish coffee our host walked us through the village to the area where we would be setting up our equipment. It was cloudy, and the smell of rain was heavy in the air, but the odor of the farm village still over powered it. Houses were built of stone, usually whitewashed, and each had a courtyard similar to our hosts. This village is very remote, high up along the slopes of the Balkan Alps, so virtually everything that the people live on throughout the year is grown in these courtyards and fields. Vines were heavy with grapes, and as our host noticed my interest in them, he assured us that we would have grapes to eat that night.

We made our way carefully along a narrow path bordered on one side by a stone wall, and on the other side a drop of about ten feet into a ravine below. Part of the path was occasionally washed out, which made it necessary for us to hop to the next section. Our choice was to either scrape our elbows against the course, protruding stones of the wall or plummet into the ravine. I thought about how dangerous it would be to take this path after dark, but then I realized the people of the village do just that every night, so I decided not to make a big deal about it. We wound our way down a serpentine path cut in zigzags down the slope until we reached the dilapidated bridge I had seen from the air. It spanned across the river, which at this time of year was flowing as a shallow stream. The wooden trellises were rough and weather worn, topped sporadically with cross pieces that mimicked the sparsely toothed grins of the people in this village. 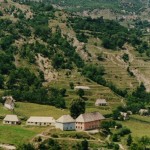 As we set out across the bridge I peered into the stream below through the gaps in the planks, and once again thought of the treachery in trying to traverse this way at night. Fields of ripening corn lined the trail as we entered the center of the valley. We made our way to a high promontory that jutted up like a fortress in the middle of the valley with high peaks swooping up the other side. Perched atop the promontory was a long, red brick school house, and an old stone church that dated back well before the days of the communist. The windows of the school had been broken out by rock throwing children. Glass strewn the yard where kids were playing fotbol in their bare feet oblivious and unconcerned and seemingly immune to the danger it presented.

A loud clap of thunder jarred the mountain rims and echoed through the valley with a percussive rumble. Within moments the rain, which had been anticipated since flying into the Balkan Alps by helicopter, now began a frenzied down pour. We scampered the last few yards into the church, but not before getting drenched. Our clothes clung to us like they had been painted on despite our hurried dive into the church building. The temperature suddenly dropped as wind blew off the mountains that rimmed the valley causing us to shiver, and fight back the clatter of teeth.

The interior of the building was painted a pale green, which gave off an eerie glow in the shadows of the storm. There was no furniture, and the interior had the appearance of being little used. Our host explained that before Communism his village had been Catholic, but most of the people were still atheists because that was how they had been raised for the last fifty years. Albania had been under Ottoman rule for five hundred years. The Ottomans occupied the central swath of Albania dividing the country into three religious groups— Catholic in the north, Muslim in the center, and Orthodox in the south. But under Communism all religions were banned.

There was nothing to do, but wait out the storm. The children who had been playing in the school yard charged into the church out of the rain, dripping wet and giggling. Their voices bounced off the emptiness of the concrete covered stone walls adding to the cacophony of the rain beating against the tiled roof, the wind howling through the valley, and the thunder that we could actually feel in our legs.

The children were curious to see strangers in their village, but it didn’t take long for them to get us included into their game of Bletë or Bee. I was instructed to stand in the center of the room with my arms crossed, and one hand open, palm out against my ear with my eyes closed. The others would then buzz like bees and poke my palm like a stinger and I was to guess who did it. As games go, I could take it or leave it, but it seemed to bring them a great deal of pleasure particularly when I guessed wrong. Like I said in my previous post this village had no electricity and no running water, so simple pleasures like playing Bletë with an American during a rain storm would be talked about for some time to come. 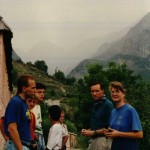 The rain finally stopped and we stepped out from under the dripping eave of the roof, and breathed in deeply the amazingly rain freshened mountain air. The clouds still hung heavy over the mountains with the promise of more rain to come, but for now we had a narrow window of opportunity to pick our way through the puddles back to our host’s home. An old man leaning on a gnarly staff greeted us as he led his sheep along the edge of the shallow river. He and his sheep had not bothered to dash out of the rain. A lifetime of such conditions had caused him to grow accustomed to it.

I walked along the path, my mind wandered as I surveyed the mountains and valley around me. The simplicity of these people’s lives astounded me. Children without computer games making up their own entertainment. Shepherds caring for their sheep despite harsh conditions. Farmers faithfully tending their fields knowing that the survival of their village depends on a good crop . All of them seemingly with an amazing contentment. They were poor by most standards, and yet over and over I heard them say that they were the richest people in the world. After watching them, and learning from them, I honestly began to believe it.

I will continue with this story next time. Until then God Bless You!