When Keeping a promise Becomes Tough

Karen become really involved in overseas missions when she went with me for the first time to Turkey in the winter of 2000 right after two terrible earthquakes devastated the Northwest regions of Turkey in August and then again in November of 1999. I have mentioned before our friend Melda who had been such a big help in setting up our clinic. Karen and Melda became fast friends almost immediately, and we are still in contact with each other. We have been to Melda’s home and she has traveled to the United States and spent time in our home. 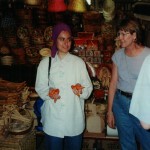 Karen and Melda’s friendship progressed into the type of friendship that remains strong even though they have different beliefs and customs. We are Christians and Melda is Muslim. We have had some lively debates and lengthy discussions as we have shared our faith with her and she has shared her faith with us, but at the end of the day we have actually become stronger friends not weaker. In this regard, Melda became interested in a former classmate of hers and talked to Karen about him, and over a period of time Karen offered her motherly/sisterly/friendly advice about Melda’s growing relationship with this man.

We were thrilled for Melda when one day she told us that she was getting married. We were even more thrilled and honored when she asked us to come to her wedding in her home town. Karen and I and Melda are confident that God put us in each others lives for a purpose, so with that in mind we made a promise that we would come. Karen and I made all of the arrangements and were planning on taking a couple of extra days in London since Karen had never been there. Melda’s wedding was September 22, 2001.

We joined Americans everywhere in grief and fear and anger from the terrorist attacks on September 11, 2001. We prayed, we mourned, we reacted like every other American. And throughout the next few days we went to special prayer meetings for the victims and their families. Like every other American we were proud of the heroes that emerged on that day and the days to follow.

Melda had e-mailed us that day asking if we were OK, and to express her and her family’s deep sadness over those attacks. We didn’t even think about attending the wedding until a couple of days later when she e-mailed again and said she understood that we could not come to her wedding. As I am sure you all remember all flights where cancelled for a week after the attacks. I made a comment to Karen that if we could still go we would as long as the government didn’t prohibit it and the flights began again.

On the following Saturday Karen and I got up and started the day in a pretty good mood compared to the days previously, but then as the minutes ticked by Karen began to get more and more agitated, and throughout the rest of the day she was very upset with me. And true to husband conduct I had no clue what was bugging her, but through out the day I could’t do anything right and glares were all I could get out of her. As we went to bed I asked her what was going on. I knew she was upset about Tuesday, but this attitude seemed to be more personal. We laid there for a moment staring at the ceiling, and then she finally said, “Are you sure we should go to Turkey?” I put my arm around her and let her rest on my chest as we talked for over an hour.

We realized that we probably were not going to be able to go because of all the flights being cancelled, but we decided that if we could—we would. I reason boiled down to our promise to our friend that we would if we could. We also realized, based on our long talks with Melda and others, that part of what has fueled the antagonism between our two faiths was not just doctrine, but a total lack of trust. We concluded that this could be a way to show that we would keep our word even if it hurt. We prayed for along time together that night. I woke up an hour later, and felt Karen’s tears still running onto my chest. It was tough, but the doubt never rose again after that night.

On Tuesday the following week my travel agent called me at my office and said, “Well, I can get you there, but it won’t be the way we planned. You’ll fly to Chicago instead of Dallas, and take a Turkish Air flight straight to Istanbul instead of going through London.”

I went home that night and Karen sat our five kids down and told them we were going to go ahead and go to Turkey. My kids and the rest of my family have always been very supportive of our mission work, but this time we had no support at all for our decision. Zero! Nada! After a long discussion they finally said they understood our point of view even though they did not agree with it.

That next Wednesday morning was the first day that air traffic began again. We flew to Chicago without incident, and for the first time waited in long security lines to board. After we were seated we watched every passenger board with scrutiny. After a time Karen leaned over and whispered, “They all look like Arabs.” I said, “They all are Arabs. We are the ones sticking out like a sore thumb.” Now I am fully aware that not everyone of Middle Eastern decent is Arab, but sometimes we still catch ourselves falling into stereotypes. The flight was full, which was another first for us. Many people from the Middle East were basically ‘getting the heck out of Dodge.‘

We arrived in Istanbul on schedule and met with some of our friends who were living in Turkey. The general atmosphere was one of deep concern, and sadness for America. Everywhere that we went people would ask if we were British and when we said we were Americans they would come out from behind their Kiosks or counters and hug us or shake our hands. One Turkish man said that Turkey wants to remain a secular republic, but their neighbors want them to become Islamic states. He said America was like a big brother that could always protect them, but when we were attacked it was like their big brother was beaten up by a bully that would be coming after them next. He said they had been living in fear of this since the attacks, but when he saw Karen and I walking through the market he knew that everything was going to be OK, and that America had been hurt but not beaten. He thanked us over and over, and I lost count of how many kisses he gave me. We hadn’t really thought about being that kind of ambassador, but we had several similar experiences during our time in Turkey. 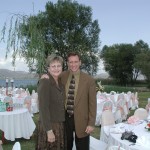 When we went to Melda’s wedding that Saturday about sixty miles east of Istanbul, we were quickly surrounded by her family and many of theTurkish people we had worked with for earthquake relief. After the wedding Melda and her husband came to us. With tears in their eyes and ours she said,”I can’t believe that you came. We had been praying that you would, but we didn’t really believe that you could.” Karen simply said, “We love you. We couldn’t miss this.” Melda and I had always been friends, but out of respect for her culture we had only shaken hands in the past, but on this day I got a big hug and we all shed many tears. 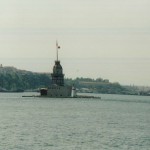 That night after Karen and I traveled back to Istanbul we took a ferry across the Bosphorus back to the European side where our hotel was. It was a beautiful September evening and the breeze was pleasant coming off the water. Karen sat close to me and we held hands. She said reflectively, “You know? I don’t think there is anywhere else on the face of the earth that we should be right now other than here.” I looked at her totally amazed, and in total agreement.

I shared a story recently about a major marker in my life with a shepherd and his sheep in Albania that redefined me as a man and I have never been the same since that night. This wedding set a similar marker for Karen and I as a couple. I don’t really know what God has in store for this friendship between Melda and Karen and I, but I know it is not usual and I know that it is not passing. I look forward to seeing what God has in store for us.

God Bless You until next time!

290 thoughts on “The Wedding Of A Friend”