On The Subject of Raki

My early life was lived in a very conservative fashion. That was the way I was raised. I was never tempted by alcohol as a teenager, nor as a college student, nor as a young adult. In fact my very first beer came while I was in a village in northern Albania—I was thirty-eight years old.

There is a moonshine made in the Balkans called Raki. It is made from distilled wine, usually from grapes, but sometimes from plums or other fruits. If it is really good quality it is distilled twice, and if it is from grapes it is a clear liquid that is indistinguishable from water. The difference between Raki and water, however, is that Raki has an average proof rating of 120 to 160. For those of you who were raised like me in a conservative non-alcohol environment that means Raki is between 60 to 80 percent alcohol by volume. For an added kick sugar is often added which makes it a blinding, staggering, headache just looking for a place to happen. Raki is made in nearly every village, and often is rated as good or bad by the locals depending on what provence from which it comes.

My first year in Albania we were advised not to drink the raki in order to set our standards apart from the standards of the villagers. I went along with that way of thinking without a problem because as I said I was raised that way. We had been picked up from our second village by helicopter later than anticipated so we arrived late to our third village and barely had enough time to meet with the mayor and set up our equipment for the Jesus Film. We had not eaten since the night before and by the time we got back to our host’s home it was very late.

As is the custom, we sat and talked until well after midnight and I began to realize that I was not going to have anything to eat that day. About 12:30 AM, however, the sons of our host, who was a very old man and who had fought against the Nazi in WWII, brought in a cloth and placed it on the floor in front of us and then brought in a wonderful feast of chicken, potatoes, tomatoes, and cucumbers. In front of each of us was also placed two cans of Amstel beer. My Albanian partners quickly popped open a can and took a swig. I asked, “Is it OK that we drink this beer?” I was thinking of the raki taboo. One of my partners said, “Oh, yes. This is a very great honor that they have shared this with you. It is a four day walk through the mountains to get to a road so they can hitchhike to the nearest town to buy the beer, and then another hitchhike to the trailhead and another four day walk to get back here. Someone in the family carried this on their back.” So I took a split second to think about it and realized that someone had to walk for eight days to get this beer here to this very remote village, and they were willing to share it with me, their guest. I picked up the Amstel and popped it open, drinking the first beer I had ever had in my whole life. I must admit that I had no second thoughts about the second can. 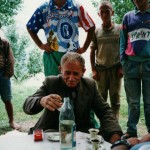 I have come to recognize over the years that different parts of the world have very different ideas about a lot of issues. It is called culture. And as I have said before I love culture. Another time in Albania I was working with an Albanian dentist friend of mine, Ardi, in a northern Gypsy village. It is the same trip where the boy ran out of our clinic buck naked—see earlier post Perseverance . We had been working with a young Albanian pastor by the name of Mondi. After we finished our last day in the village, Mondi said to Ardi and I, “Today you will come to my home.” Which is an invitation to accept his hospitality. Ardi asked, “Will we drink raki?” Mondi staunchly replied, “No! I am very much against alcohol. We will drink beer.” What more needs to be said? 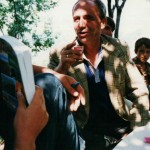 I found that even though I have never changed my beliefs or compromised the message of the Gospel, when being invited into a home it always opened doors to share our story if we at least accepted the hosts invitation to have a small glass of raki. Many times it was the hosts own batch, and they would be eager to see how we liked it. I would usually take a sip and smile and try desperately to hold back the vicious cough associated with the chemical cauterization of my lips, tongue, throat, nose, eyes, and esophagus. I would reply simply, “Hmmm.” and nod my head idiotically while mumbling under my breath, “Please don’t expect me to take another.” Fortunately they never understood my English and I never repeated it in Albanian. 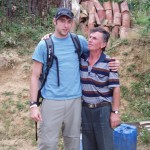 Arguably the craziest encounter I have ever had with raki was during a visit to a village in central Albania with my second son Jeff. Jeff at this time was an adult and a valuable member of our team. One morning we woke up in the home of a mayor who was very pushy and actually scared our female team mates to the point that we had to find other accommodations for them. The next morning I woke up and was very congested and achy and I knew from the feel of it that my condition was going to degenerate into an all out head cold. Our host, seeing that I was struggling with my breathing, informed me that if I would take just a little raki in the palm of my hand and snort it up one nostril at a time, that my head would clear and I would feel better. Jeff at this point played the devil on my left shoulder saying, “Do it! Do it!”, while commonsense on my right shoulder said, “Don’t be stupid!” My left shoulder prevailed and accidentally poured at least twice as much raki into the palm of my hand as I should have, and before I could change my mind I snorted the raki vigorously into both nostrils at the same time. If my mom or my wife Karen had been there they would have chided that I got what I deserved—blinding, debilitating, pain ravaging my skull to the back of my brain with incendiary furor. I vaguely remember the mayor pulling at his hair and shouting, “O bobobo!” Which I am pretty sure is Albanian for, “What a nincompoop!” I also vaguely remember Jeff rolling on the futon holding his side because he was laughing so hard. His first comment to me after the flames abated from every body part above my shoulders was, “Dad, you are one crazy dude!” Strangely, though, I was no longer congested, nor did I have any more problems with my breathing the rest of the day. WARNING: DO NOT TRY THIS AT HOME!

There are many more amusing stories on this topic that I will share at another time, but for now may God bless you until next time!

560 thoughts on “What Proof Was That Again?”