Thank You As a Verb 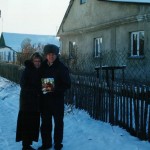 I have had the privilege to be in some pretty remarkable places and to work with some truly remarkable people. My best memories are not so much of the places that I have been, but of the people I have met in those places. I have already mentioned the excitement that I have when I learn about, and observe other cultures. This excitement drives me forward to the next encounter with culture, and the fundamental need that I have to learn something new everyday. For this reason I am almost never bored, I rarely find offense in someone else’s culture, and I find myself blending into my new surroundings in ways that seem to make some people uncomfortable.

Having said this I should point out that I have standards, and strong convictions and I don’t compromise what I believe. But my world view is such that I believe God wants to have a personal relationship with me as He does with every other human on the planet. By this world view I recognize that God created people, their cultures, and their diversity. So I have long since put off the notion that my culture is better than someone else’s, which has allowed me to enjoy the differences with, at times, a child-like awe.

One such cultural manifestation that I not only found fascinating, but also deeply appreciated was in Kazakhstan in the way that the people thanked us for coming to their village or orphanage. My first encounter was when a woman walked into our make-shift clinic in the home of a man that was hosting us in his village. My team was working in two shifts, and was made up of Karen my wife, Mark, Dwayne, DeAnne, Luba, Dr. Igor, and Timor. The woman had been to our clinic a couple of hours before to have a toothache taken care of, and now was returning to thank us. I was actually seeing another patient when this lady stood in the middle of the room and announced that she wanted to thank us by singing a song for us. She then proceeded to sing a very beautiful opera in  Russian. I mean she sounded like a diva—folded hands in front of her, erect posture, and it didn’t matter that she was only three feet away from us—she sang as if she were trying to reach the back row of a great hall. It was amazing, and we were all speechless. After she sang for about ten minutes, she thanked us, bowed, and left the clinic as if she were walking off a stage. 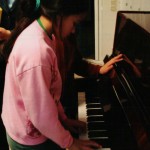 Our word for today is СПАСИБО, which is Russian for thank you, and is pronounced SPA-SEE-BOW. But in this particular case thank you was a verb in the form of a beautiful aria. We all loved it. And you know? You can’t put a price on that. From the simplicity of that woman’s life she gave us what she had, and it touched us more deeply than anything else she could have offered. 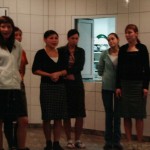 At that same time in Kazakhstan our team had been working until very late every night, but one night we had a group of community leaders who wanted to take us to dinner. It had been snowing all day, and by the time we were finished at the restaurant it was snowing heavily. At least it seemed heavy to us Kansans, but to the people who only lived about three hundred miles south of Siberia it was probably considered just a light autumn dusting. Our drive was going to take about two hours. As we drove back to the village where we were staying we saw a woman walking along side of the road. In Kazakhstan everyone hitchhikes—we had actually done it earlier in Almaty. After the lady had settled in with us she asked if she could thank us with a song. Just like the other lady in the clinic this lady sang a-cappella for the next thirty minutes. And just as before it was beautiful. When we arrived in her village she got out thanked us again and we drove off down the dark, snowy, northern Kazakh road. 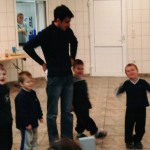 Every where we went in Kazakhstan the people sang their thanks to us. The children in the orphanages had prepared musical programs for us and sang to us at every meal. A number of Kazakhs invited us to their homes, and sang to us with their children joining them in full voice. It was great! Several times instruments were used, but mostly it was just a nice blend of vocal harmonies. What amazed me the most was how natural it was for the children to sing to strangers, both in the orphanages and in the private homes. Another amazing thing about their singing was that these were not just little ditties, they were well rehearsed, nearly full concert performances. 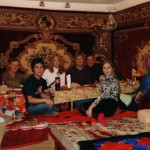 Our last night before we were to go to the airport and fly out about 3 AM, we went to an Uzbek doctors home. We sat on the floor, which was the custom in every home we went to, on pillows with the walls covered with intricately woven tapestries and rugs. After a huge supper with many courses, the doctor pulled out his guitar and sang to us for nearly an hour. He even taught us a few songs that we tried, pitifully I might add, to sing. My only sadness with this custom came from our own unpreparedness to sing to them, which they asked us to do every where we went. We sang a little, but I told my team next time we come to Kazakhstan part of our team preparation in Wichita will be to practice a few nice tunes and to learn at least one song in Russian to sing to them.

I think sometimes we feel that we have to go out of our way, or spend a lot of money in order to show our appreciation or gratitude to someone. My time in Kazakhstan showed me just how special a gift of thanks can be when it is a simple gesture such as sharing something that is a part of who we are. When we share with each other our talents, and gifts, or let others get a glimpse of our culture through an act of thanks we make the world just a little bit smaller. It can help us decrease our circles of thems and bring them into our circle of us’s. And that usually can only be a good thing.

May God Bless you  until next time!