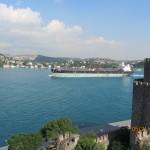 I am in no way a master at linguistics. I have, however, always been interested in languages, and I have tried to learn a little of the language in each culture that I have been in. I have, sitting on the shelves in my library, dictionaries and/or study guides for Albanian, English, French, German, Greek, Hungarian, Patois (Jamaican), Russian, Spanish, Swahili, and Turkish. Unfortunately none of these languages have miraculously, through some sort of cosmic transference, made the leap from the bookshelf to my brain. I have worked hard at some of those languages over the years, but so far the only point of pride that I have in regard to linguistic prowess is the claim that I can ask to find where the bathroom is in eleven different languages. But, when you stop to think about it, what more do you really need?

I have learned—usually the hard way—that certain pronunciations of words in the English language are also used in other languages, and may have completely different meanings. This may not seem like such a big deal, but sometimes the difference in meaning is offensive, obscene, or down right socially unacceptable. If you are not aware of these verbal bombs you can get yourself into trouble quicker than you can say, “Oh my gosh. I think I’ll just shut up now.” I could give you a vocabulary list of these dubious words, which  for my English speaking readers would seem totally innocuous, but for the sake of my international readers I won’t. I will just give one innocent example that happened when my wife, Karen wanted to take a picture of the mother of one of our Albanian friends while visiting in Albania. When Karen asked if she could take the mother’s picture, the elderly woman, with a horrified look on her face, asked her daughter, “What did she just say?” Hmm… we have since learned to use the word photo. We have also learned to use other synonyms  when speaking in English with the intent of having it translated. 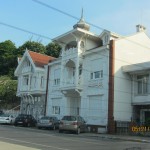 Sometimes languages are just hard to hear. If you are not used to hearing  them it may seem like a cacophony of blah, blah, blahs, and no matter how hard you concentrate it doesn’t seem to get any clearer. We speakers of the English language have overcome that problem by simply speaking very…very…slow, and very…very…loud as if our audience is moronic, or suffering from presbycusis. Some people can hear a language and pick it up fairly quickly while others struggle. But just because you struggle doesn’t mean you should give up trying. Everyone appreciates the effort of someone trying to communicate to them in their own language.

I have mentioned a friend of mine named Charlie—see previous posts—who was a retired Boeing worker and was good with a pair of pliers and a screwdriver. Charlie went with me twice to Turkey, helping me set up dental clinics during earthquake relief efforts. Charlie was the type of guy who never was afraid to jump right into a situation and try something new. We had been given laminated cards with a few Turkish phrases, currency exchange rates, numbers, and popular food items that we could carry in our pockets as a quick reference guide. Charlie never quite got the hang of the Turkish phrases,  but that didn’t stop him from striking up conversations with Turks whenever he had the chance. One time we stopped at a restaurant along side of a highway, and a group of young Turks were standing in a group talking. Charlie barged right into their circle and confidently said, “Merabella. Mentholatum.” What he meant to say was, “Merhaba. Memnun oldum,” which means, Hello. Pleased to meet you, or something like that. The young Turks first looked shocked that this old man was interrupting them, and then confused at what he had said. One of the Turks exclaimed in English, “What are you trying to say?” Unphased, Charlie just chuckled and said, “Oh good you speak English. I’m trying to say Hello, pleased to meet you,” as he held up his laminated card for the Turk to see. The young man looked over Charlie’s shoulder with an amused look on his face, and took several minutes coaching Charlie how to say the phrase. 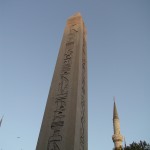 On another trip to Turkey, Karen and I traveled with a dental school buddy and his wife named Mark and Karen. By this time I had picked up a little of the language and was able to get around enough with taxis, and ordering in restaurants that our friends that lived there didn’t have to “baby sit” us the whole time. It has always been important to me to learn a little of the language, study maps, learn some of the culture, learn how to properly exchange and use money, and how to order food so that I am not too big of a burden on the friends that live there. Mark and Karen, and Karen and I had worked for about a week in the dental clinic that Charlie and I had set up a few months before in a city about eighty miles east of Istanbul called Adapazzarι. After we finished, we spent a couple of days in Istanbul before we left to come home. One night we decided to take a ferry across the Bosphorus to the Asian side just to see the lights of Istanbul from the water. After coming back over to the European side we took a tram to the old city of Istanbul in Sultanahmet. Between the Haghia Sophia, which is an ancient Byzantine church that was  converted into a mosque under the Ottomans and is now a museum, and the Blue Mosque, which is an impressive structure with six minerats, there is a mall with gardens and fountains. At night the structures are accent lighted and very beautiful. Off to one side of the  mall is a tea garden canopied by awnings and vines. It was late May, and the night had a cool, but pleasant breeze, so the four of us decided to have some Turkish tea in the tea garden. Mark wanted to try to speak some Turkish to our waiter so he asked me how to say, Excuse me. Bill please. I told him what I had learned, “Affedersiniz. Hesap lütfen.” The entire time that the Karens and I sat in the tea garden talking and relaxing, Mark was practicing the phrase over and over. “Affedersiniz, hesap lütfen. Affedersiniz, hesap lütfen. Finally the moment came when we wanted to leave, and it was time to pay the bill. Mark looked around for the waiter and motioned for him to come. As the waiter approached, Mark recited his newly learned phrase with confidence. The waiter stopped short of reaching our table and turned and walked off to wait on another table across the way. Mark immediately turned back to us with a dejected look on his face as if somebody had just shot his dog and said disappointedly, “Well, that didn’t work!” We began laughing so hard we couldn’t see straight. As it turned out the waiter hadn’t seen or heard Mark because our silhouettes had been backlit by the lights of the mall. Eventually the waiter returned and Mark was able to make his request speaking in perfect Turkish.