For the next few stories I am going to describe various scenes in different parts of the world that I have done my dental missions in. It will be an opportunity for you to close your eyes and visualize the scene, and hopefully I will be able to describe it to you in such a way that you feel like you are there. Of course if you really do close your eyes you won’t be able to read the story, so just pretend, and let yourself be pulled into the scene. 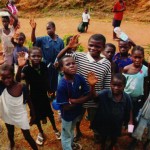 The first description story will be a village in Liberia. Liberia is situated on the far western coast of Africa just under what looks like a big bulge pushing into the Atlantic Ocean. It is bordered by Sierra Leone on the west, Guinea on the north, and Côte d’Ivoire (Ivory Coast) on the east, with the Atlantic ocean on the south. The country was originally established in 1847, when aided by the United States, freed slaves formed the Republic of Liberia. The capitol is Monrovia, named after the fifth president of the United States, James Monroe.   This created an elite class of citizens, which would eventually contribute to the years of civil war that ravaged that country. Liberia is rich in gold, diamonds, oil, rubber, and lumber, however, a high percentage of these resources are predominantly owned by foreign interests. 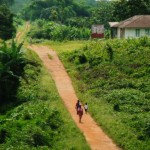 Plush, green jungle encroaches on man’s attempt to hack out an existence for himself—a never ending, arduous struggle. The road—a ribbon of reddish-brown dirt—cuts through the village, and then disappears into the dense canopy of forest on the other side. White-washed cinder block houses with corrugated tin roofs emerge sporadically from the green carpet of grass and tuffs of bushes. Humidity hazes the horizon above the trees. Towering columns of thunderheads stand as harbingers of the daily drenching to come. It is mid-  morning and already one hundred degrees Fahrenheit with a percent humidity nearly to match. Most of the people who live in the village are indoors or under the shade of large leafed trees. There is no wind. There is no breeze. Only a stifling, debilitating heaviness that hangs like weights in sweat drenched clothes.

A few children, and young adults make their way to our van as we begin to unload our equipment to set up a clinic in the nearby church. Our team quickly enters the building, and as I enter I am greeted by a man with one of his arms missing just above the elbow—a victim of a short sleeve amputation during the civil war. I learned later that this was a common practice modified in some instances to a long sleeve amputation—one at the wrist. There are various reasons for these types of mutilations—tribal, religious, government verses rebel—but the truth is, man has never really needed to work to hard to come up with excuses for inflicting cruelty on another human being. Many of the children that surround us have been orphaned by the war, raised by relatives—these are the lucky ones, many children without family fill orphanages across the country. This steels my resolve and belief that those of us who have the compunction to do good must do it, because those who have the compunction to do evil are working overtime, and are definitely busy carrying out their plans against their neighbors to do them harm. 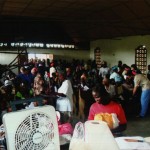 The church is full of people from the village and surrounding area. They have been told we were coming, and they have been waiting for us. The windows of the church are an open ornate lattice work of concrete. The walls are pocked and chipped with bullet holes inside and out. Exposed rebar juts hazardously from larger holes. We use the podium to separate the clinic from the waiting area, with the medical team on one side of the pulpit and the dental team on the other. The pews quickly fill with people, but another long line trails out into the hot sun. This promises to be a very long day. 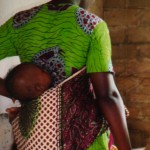 A woman wearing a long, green patterned dress stands at the head of the medical line with her baby slung in a matching sash across her back. The baby sleeps peacefully despite the steady din of noise from the crowd. No one seems to mind the long lines. They are just thankful that our team has come.

There is no electricity in the church. Both teams have to make due with what we have. We figure a little help is better than no help at all. For me this means pain management for the worse cases. I have been told that no dentist has ever come to this village. I didn’t really believe them until our Liberian team consistently had to describe to each villager  exactly what a dentist was. They had no idea. Slowly the stress of seeing so many people, and now the fact that I was their first contact with a member of my profession began to wear me down. I have to constantly pray for strength because no where have I ever done anything harder or more demanding. I felt overwhelmed, and inadequate, but I persevered by remembering the story of the Starfish. We had only a plastic chair for the patient to sit in, and I had them lean back on the back legs against my lap while I hovered over them from behind trying to use the  natural light coming through the window. 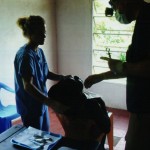 My first patient was an elderly man who sat down in the chair with a terrified look on his face. He pointed to a badly broken down tooth and explained that he had been in pain for months. As I placed my small mirror into his mouth he began to scream hysterically. This sudden outburst not only startled me, but our entire team. I quickly backed out of his mouth and asked if that hurt. He said it didn’t , so I asked him why he had screamed. He said he screamed because he thought he was supposed to. I said, “No, you don’t have to scream unless it hurts, and I am going to try and make sure it doesn’t hurt.” When I looked around, the group of five people who  were sitting on the podium waiting their turn had suddenly disappeared, along with every other villager who had been waiting for the dentist. I turned to see them pushing their way frantically out the back door trying to get away. I eventually convinced the elderly man to let me remove the tooth. I gave him anesthetic, and after removing the badly infected molar he exclaimed, “Oh! It didn’t hurt!” I told him to go tell his neighbors. Within a few minutes the others finally returned to their waiting positions.

Some of our difficulty came from the villagers who didn’t speak English or the several languages that our Liberian team mates spoke. There are about thirty different languages spoken in the region. I was glad we were good at charades. I finally learned that Liberian English has its own dialect. After several patients were unresponsive to, “Close you mouth a little.” I changed it to the Liberian alternative of, “Shot yo mouf,” and oddly enough that worked like a charm from then on.

Those monstrous thunderheads finally dumped a powerful rain on us in the afternoon. It didn’t get cooler, just muggier. The down pour beat heavily on the corrugated tin roof, drowning out any ability we had to communicate short of an all out yell. At one point I looked at my daughter, Aubrey, and said, “I am never going to complain about the wind in Kansas again.” Being from Kansas, we are used to heavy winds, but in the jungle there was no wind, only a heavy stillness. To this day I still have never complained no matter how gusty, and blustery the day has gotten.

None of us openly complained about the conditions in the village. We made due with what we had, and we realized that these people deal with these conditions everyday of their lives. I learned a lot about the strength of the human spirit in the face of harsh conditions, injustice, and violence from the Liberians in the villages. Their example of determination, and perseverance to not just survive, but to conquer their obstacles led them to declare to us, “Don’t help us. Hope us. Give us hope that we can get better on our own.”