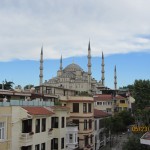 The second part of my story takes place in Istanbul, Turkey. After leaving Tirana, Albania, Karen and I flew to Istanbul via Turkish Airlines. We got our 90 day visas for only twenty dollars, which was a nice surprise because last time we were in Istanbul it was forty-five dollars. It took no time again to get all of our luggage and to clear customs, and before we knew it we were outside the secure doors and looking into a crowd of people who were waiting for travelers to come through. 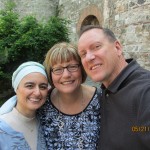 We didn’t immediately see our friend Melda, but Karen and I had been in these type of situations before where you are looking into a sea of faces trying to pick out one that you recognize. As we had learned in the past we split up and each went in a different direction searching through the packed elbow to elbow, shoulder to shoulder, ten deep thick crowd. It wasn’t long before we heard above every other shout, “Karen! Rob!” We turned to see Melda hanging precariously over the rope barrier that separated those waiting from those coming, waving her arms frantically to get our attention.

Whenever I get teary eyed, or choked up in a movie it is always when two people are reuniting, almost never when two people are parting. So to say that I got a little teary eyed and choked up when Karen literally dash into Melda’s arms and the two women cried and hugged each other with tears streaming down their faces… well, I’m getting kind of teary eyed and choked up right now just writing about it. I grabbed up the suitcase that Karen dropped behind and strode over to the two women who were in a deep embrace even though the security rope was still between them. Melda looked at me over Karen’s shoulder, her cheeks drenched with tears, and said, “I can’t believe you are here.”

What is it about this kind of friendship that is still so strong despite the fact it has been years since we have seen each other? We have kept in touch through e-mails, and Facebook, but how can that be enough to explain the deep affection this friendship has created, particularly between Karen and Melda? We actually talked about this. Our initial common bond was humanitarian aid after the earthquakes devastated the region in August 1999. Karen and I first met Melda who acted as our interpreter, consultant, and guide—introducing us to the proper people to set up the clinics, and helping us in so many ways to make our attempt at relief efforts more effective. It didn’t take long for a bond to form. The three of us agreed on the answer to these questions. First, we all saw a need that we couldn’t ignore—people hurting. Second, we all had a deep sense that God wanted us to do whatever we could to help. And Third, Karen and I recognized Melda, and Melda recognized us as people who truly wanted to live our lives for God. Our beliefs are different, but there can be no mistaking that God put the three of us together for a purpose. 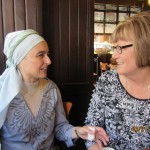 Well, back to the airport. After Karen and Melda finally released from each other they realized we had to get out of that area. Melda and I shook hands which is the culturally appropriate thing to do, and we headed for the airport parking garage. Melda took us to our boutique hotel in Sultanahmet, the old city of Istanbul, so we could get checked in, and then took us to a fish restaurant on the Bosphorus. 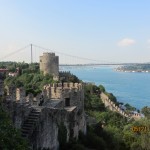 After a couple of hours of catching up on our lives over the last ten years, we went to a place Karen and I had never been to before, the Fortress of Rumeli. The fortress was built at the narrowest point of the Bosphorus in 1452, across from the Fortress of Anatolia on the Asian side. This fortress represents everything that I love about history. There are cisterns in the inner court of the fortress that were built back in the Byzantine period, and the walls and fifteen towers were built by various Ottoman Sultans. You can walk where Byzantines, and Ottomans walked over hundreds of years. You can climb 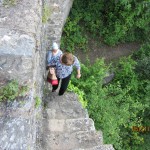 the steep, narrow, treacherously unbanistered, uneven steps to the top of the wall—did I use enough adjectives?—and look out over the Bosphorus toward the Black Sea and try to imagine what it would have been like five hundred years ago. A place like this could never exist for tourism in the U.S.A.—too many safety regulations, too many people looking to blame someone else if they fall off. But the beauty is this place does exist and you can experience it first hand—just be careful and DON’T FALL OFF! So here comes my attempt at logical thought… I love history. Istanbul is full of history. I love Istanbul. 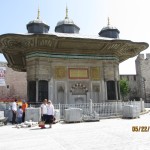 The nice thing about staying in Sultanahmet, if you like history, is that there are so many places to see. Our hotel was within easy walking distance of the Blue Mosque and the Haghia Sophia. That means we were also very close to the Hippodrome, Topkapι Palace, and the Cisterns (remember James Bond in To Russia With Love?). We walked to the tram from our hotel and got off at the Covered or Grand Bazaar. I was in Turkey six times in eighteen months during earthquake relief and in that time my one true weakness was Turkish carpets. I ended up buying six of them most of them Hereke carpets, which are hand made and typically have a minimum of three hundred knots per square inch. I bought most of them from the same dealer at different times. Hakan is a famous carpet dealer in the Grand Bazaar. His basement wall is covered with famous world leaders, and actors. He actually remembered me, even though it had been eleven years since I had seen him. He said, “Yes, you were the dentist who came and worked in Adapazarι.” Wow! It was nice to be remembered. I had originally thought of buying another carpet from him when I fortunately remembered that I have a daughter getting married in July, so I really had no business buying another carpet at that time. But man I sure saw a couple that I liked. 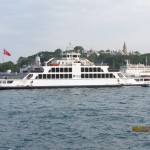 Melda was willing to take us anywhere we wanted to go. We told her that our number one purpose for coming through Istanbul was to see her so any time we could spend together was what was most important. We wanted to at least take a ferry across to the Asian side mainly just for the ride, which gave Karen and Melda plenty of time to talk. An interesting coincidence was that the Royal Caribbean ship Mariner of the Seas was docked in Istanbul. Karen and I had cruised that very same ship in the Caribbean a few years ago.

Although this was a very fast trip—three days in Albania and two days in Istanbul—its was so great to see friends that have been, and remained special over the years. Since those days years ago in Albania and Turkey we have had other dental missions in Kazakhstan, Liberia, and Kenya, but this trip reminded us of what we loved about the people and the culture of Albania and Turkey. It was like going home. It was like we had never left. Is that strange?

I hope you also have the opportunity, and the privilege to have deep cross-cultural friendships that will last you a life time. It really makes life more fun. It makes life worth living. May God Bless you until next time!