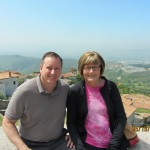 I am going to split my story into two parts. The first part will take place in Albania, and the second will take place in Turkey. I am going to share the terrific experiences that Karen and I had last week reconnecting with old friends after a long absence. In Albania our common bond is Jesus Christ. Karen and I went back to celebrate twenty years of Campus Crusade for Christ being in Albania right after the fall of Communism in that country. As I have explained in previous posts I was able to be part of Jesus Film summer projects in the remote villages of Albania, in which we told of the story of Jesus to anyone who was willing to listen.

The celebration took place over a weekend—yes, Karen and I flew to Albania for the weekend. I know it sounds a little crazy, but it was such a wonderful time with old friends, and a chance to make new ones, that it would have been crazy not to go. People literally came from all over the world to be there for the weekend. I hadn’t been to Albania for six years, but the bond had never been broken, so when our friend Avni picked us up at the airport it was like we had never been apart.

I need to point out the tremendous improvements that have taken place in Albania since I was last there. First, Nënë Tereza (Mother Teresa) International Airport is now a modern facility, and a vast improvement from my first experience  with the very small Rinas Airport in 1994. Our luggage was actually some of the first off the plane from Istanbul, so Avni only had to wait about twenty minutes for us to clear customs—in years past, he or someone else would have had to wait two or more hours on us. Gone is the de-planed luggage area that was once roped off just beyond passport control, in which you had to step over the rope and push and shove your way to your luggage in a type of mayhem free-for-all. Once you managed to get your luggage, you then had to drag your luggage pushing and shoving your way back across the rope, and then swim upstream through the crowds of travelers from at least two arriving airlines to get to customs. Gone are the Gypsy children crowding in on you trying to carry your bags the second you walk out the doors. Gone also, and much to our pleasant surprise, were all the official forms that had to be filled out, and the embarkation tax that we used to have to pay. 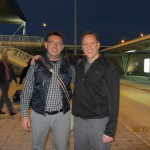 As Avni, Karen, and I were walking toward the well-paved covered parking lot, also an improvement, a voice from behind called out, “Rob…Avni.” We turned to find my Albanian dentist friend, Ardi, who I had worked with on a couple of dental missions to the Gypsies in the north, and south of Albania. I hadn’t seen Ardi in eight or nine years. The crazy, small world kinda thing was that he now lives and works in Abu Dhabi in the United Arab Emirates, and he had come to Albania the night before to visit his family. He was at the airport that night because not all of his luggage had arrived at the same time he did, and he had come back to claim it. Had we been even one minute earlier or later we would have missed each other. 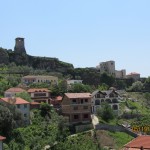 Someday I am going to write a story that relates all of the small world encounters I have had over the years. But concerning this trip, Karen and I had a friend named Aija, who was visiting from Latvia, to our home the Sunday night before we left for Albania. We had her over to meet some other friends who were Albanian and Latvian who had gotten married a couple of years ago and are now living in Wichita. A few days later as we were in a bus on our way back to Tirana from the castle town of Kruja we got to talking to an American named Tom who had come from Florida for the celebration. As he was describing his job where he frequently travels to Eastern Europe, I thought of our Latvian friend who visited us because she was doing the exact same thing in Latvia. After Tom finished, I told him about our friend Aija, and of course he not only knew her, but they were also friends. Here we are on a bus in central Albania talking to a guy from Florida who is friends with our friend from Latvia. These kind of stories just amaze me. 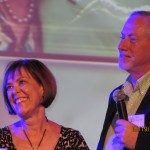 Our weekend was filled with receptions, and tours, and updates on the projects going on in Albania, and in other parts of the world by Albanians. We also had banquets, picnics, and programs and presentations. We met with the family members of some of our Albanian friends who live in Wichita who had come to Tirana to visit us. I was pretty rusty on any of the Albanian language that I knew, and so when our friend’s family came—who spoke no English—I pulled out my i-phone, and with the i-Translate App we typed out our conversation back and forth until we had procured all of the information from each other that we possibly could. It wasn’t until later that Karen pointed out that my phone was roaming internationally during this whole session…gulp…Oh well, you can’t put a price on a good time.

Other improvements were the roads. The construction that was going on last time I was there, which used to tie up traffic in a horrendous manner, was now completed, and what used to take an hour and a half to travel now took only about ten minutes. This opened up a lot more opportunities to meet with people, whereas before we spent half the day just trying to get from one place to another. 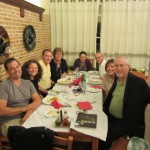 Albania is where missions really started for me (see previous posts), and although I have been to several other places to work since those times, my heart never really left Albania. I didn’t realize how much I had missed it until Karen and I got back there. The friends that we have in Albania we can truly say are life long friends. There have been times when I have met someone, and I have had the sense that I would never see them again. Strangely, I never feel that way about my Albanian friends. There is always a feeling that at sometime, and somewhere down the road we will be together again. And even if we don’t see each other on this earth we will be together in heaven, because like I said, our common bond is Jesus Christ.

99 thoughts on “A Family Reunion”