A Journal Entry Too Far 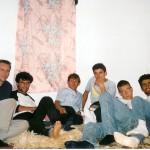 In 1995, I took my oldest and one-month-shy-of-fifteen year old son, Josh, with me on my second AERO Projekt in the remote mountains of northern Albania. It was the same trip that I described in Travel Mercies concerning our bus driver who was driving without his headlights through the treacherous mountain roads at night. Josh did a great job on the project, and was a valuable member of our team. 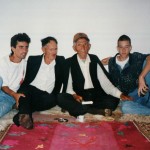 Josh and I along with our team mates Petrit, Ben, Keta, and Stephanie went into three villages around the city of Kukës in northeastern Albania near the Serbian border. I have described the AERO Projekt in previous posts. When we returned to our base camp a number of factors played into the fact that nearly everyone, including Albanians, got a terrible stomach flu. Now I had been to Albania the year before and many of the Americans had gotten sick with illnesses that literally lasted for months afterward, so when I saw the illness beginning to spread from person to person the dread of a long illness was enormously frightening.

I was the first to get sick between Josh and I. It was terrible. To be sick away from home is bad enough, but to be sick in a remote camp with virtually no conveniences is even worse. Between frequent throwing up and diarrhea, and the knowledge that there was no way of getting home or even to a hospital, I was a very miserable camper indeed. Josh came to me at one point and asked how I was doing. I really just felt like it would be better for me to die, so I said to him, “Just bury me here, cut my heart out and take it home to mom.”

Fortunately the flu didn’t last for months, but was only of the twenty-four hour variety. By the time I started feeling better, Josh was in the midst of his gut wrenching throws. I went to his bunk and felt his forehead for a fever, and asked him how he felt. He said, “Just cut my heart out and take it home to mom.” We eventually both began to feel better, but for the rest of the trip we had  a weak feeling in our stomachs as did everyone else.

We made it back into our follow-up village to join our team less than a day behind them. The problem that kept us from feeling better faster was that it was constantly raining, and at such a high altitude the temperature was always chilly. So being wet and cold always has a way of damping ones spirits. 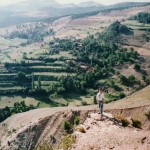 One day we decided to walk to another village that was visible from our host village, but was clear across the valley. We took off on our mountain trek, and true to normal conditions it began to rain on us. As we approached the village, Josh informed me that he was starting not to feel too well. The hike was strenuous, we were all wet and cold, and I was starting not to feel too well either. 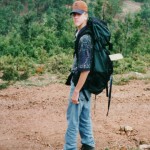 As we got to the outskirts of the village Josh asked if he could just wait under a large tree we had passed. I realized that once we arrived in the village all the men would stop what they were doing and come to a  home that would host all of us. I knew from past experience that we would sit on the floor on sheep skin rugs or pillows around the periphery of the room with our backs leaning up against the wall. The Albanian culture was such that at that particular time and place every man in the room would also be smoking cigarettes, and since it was chilly and raining outside all the windows would be closed. I knew that a tobacco smoke filled room was not going to do Josh any good so I consented to let him rest under the tree.

Like a good father I left him with a poncho, water, an MRE (Meal Ready to Eat), and helped him gather a pile of stones around him to throw at any sheep dogs that might take issue with him sitting there. I told him that we would be just up the road and we would be back in about two hours. As expected we were cordially greeted and invited into a home, and soon every man in the village was sitting against the wall on rugs smoking cigarettes with the windows closed. At this point I felt good about my decision to leave Josh under that tree.

As is the culture in northern Albania, we talked for a time, but then later there was just a time to enjoy each others presence without the need to speak. The rain began to beat furiously against the terra cotta tiled roof. I could hardly see across the room for the smoke, but everyone just seemed to be comfortable sitting and relaxing for a while so I pulled out my journal and continued to chronicle the events of the day. 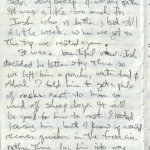 I wrote,“…We then started up the other side. Very steep & winding path. It was a little too much for Josh who is better, but still a little weak. When we got to the top we rested again. It was a beautiful view. Josh decided he better stay there so we left him a poncho, water, food, & Advil. I told him to get a pile of rocks next to him to ward off sheep dogs. It will be good for him to rest. I hated leaving him, but I knew he would recover quicker in the fresh air rather than lug him into more smoke filled homes. It’s Wed. PM. We are sitting in a home out of the rain, that means Josh is under his poncho…”

Now, I have always kept pretty detailed journals of my travels, and it is always a special time when I come home and my wife Karen reads through them. I have to say that at this point in her reading she stopped, looked up at me with a look of shear terror that quickly transmuted into a look that no husband on the face of the planet ever wants to get from his wife, and said, “You left Josh?!!!” “Yes,  but…” “You left Josh in the middle of the mountains…in the rain…in Albania?!!!” . “Yes, but he did feel better…”. “I can’t believe you left Josh all by himself!” She shook her head and continued to read the journal, but every few minutes or so she would look up at me with disgust and shake her head disapprovingly.

I was in the dog house for a long time after that. I should point out that although it has only been seventeen years since that happened and Josh is now a husband and father of two, I am still in the dog house over this matter. If you want to get me in trouble just bring up that day in Albania. In my defense, however, when I got back to Josh later he had made friends with some shepherd boys who had shown him how to use a sling shot. Even though they did not speak the same language the boys played together like boys all over the world do, and were having a great time slinging stones at targets that included, but not exclusively, the poor hapless sheep. My thinking as a loving, caring, nurturing father was that I had just provided my son an important, and vital experience into his becoming a masculine, manly, man. I have to date not found one mother who agrees with me, although a number of fathers have given me subtle kudos—secretly, stealthily, very carefully so as not to let their wives see them do it. And as I am writing this, Karen has come up behind me and given me a squeeze on my neck with her icy, cold hands, and a playful snarl at the memory of that day!