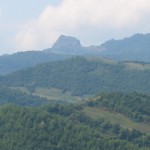 I am always amazed when I see God working in the lives of people all around me. I guess I shouldn’t be because I know that God is at work at all times all around me, but it is just so cool to get to see it happening first hand. It is easy to pass events off as simply coincidence, but many times this is a cop-out, and we miss a huge blessing, not to mention we miss opportunities to go way beyond our own capabilities and circumstances and do something truly spectacular. There are just certain times when easy explanations, or quick answers can’t and shouldn’t be attempted. It is at these times I think we have the privilege to marvel at God’s intentional design—we get a glimpse of His plan to bring back to Himself people who either never knew Him, or purposefully turned their backs on Him. And when we get to see these times we can embrace His great love for us, and His grace and mercy towards us.

One of my favorite memories from my time in Albania during the AERO Projekt—see previous posts for an explanation—I was able to witness first hand how God designed a plan to reach not only one person, but nearly an entire village for Himself. My team had loaded our equipment on the back of two horses and we walked from one village to another taking about three hours to do so. When we arrived in what was supposed to be our third village of the cycle we found that the village, which was high up in the mountains, was preparing for an all-village wedding. People were very busy with the preparations, and there was an aire of excitement that seemed to emanate from everyone who greeted us as we walked into the center of the village.

As was the usual custom, I asked to meet with the mayor to introduce ourselves, and to ask him to help our team in showing the Jesus Film later that night. He said that his village would love to see the Jesus Film, but that there was a big wedding going on that night and no one would come to our film. He apologized and asked if maybe we could come back another time. I went back to my team, and told them what they had already figured out about the wedding plans, and that we would either have to go back to the base camp or find another village. None of us wanted to go back to the base camp so I called our director, Edi, and he told me of a village much higher up into the mountains that appeared to have no road to it. He said that it was a village that they were not planning on going to this year during the summer projekt because of the problem in getting there. I told him I would call him back. Our team formed a circle in the shade of a building and began to pray for God to reveal His will to us. 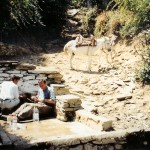 No sooner had we began praying, than a furgon or van pulled into the village center. I was surprised to see a furgon because there was really no road to this village. We had followed a wide trail with the horses in order to get up to the village, but the furgon had made the trek carrying goods for the wedding. I let out a yell—which is not usually done in Albania—startling my team who were praying with their heads down. They looked at me like I had lost my mind as I broke ranks and ran off after the furgon. When I caught up with van I asked the driver if he knew the village of Pagri, and he said he did, but that it was very far up into the mountains and there was no road. I looked over his beat up van and asked if he had ever been there and he said he had. I offered to pay him if he would take us to Pagri, and he consented. Our team piled into the van with our equipment and made our way to the trail head that would lead us deeper into the mountains.

The trail was at times barely wide enough for the van to squeeze through. We bumped and bounced, and jolted our way up the slope. I began to understand why the van was so beat up. When we arrived in Pagri, which was a very small, but beautifully situated village, a man came running out of his house and shook our hands vigorously, stating that he was the mayor and that they rarely had visitors, and that we were most welcome. He invited us into his home for food and volunteered to let us stay the night in his home. After a while another man, who was introduced as the school teacher came and sat with us. Soon a heated discussion broke out between the mayor and the school teacher, which I thought by its intensity was going to end up in a fist fight. Finally the mayor turned to me and apologized that the teacher wanted us to stay in his home. He was apologetic because he had already offered us his hospitality, and he thought we would be offended if we were passed off to someone else. I assured him that we were not offended, and that we were very appreciative of the hospitality he had already shown us.

We showed the Jesus Film that night, and then went to the teachers home for supper and a place to sleep for the night. The next morning I was sitting on the front porch drinking Turkish coffee with the man, his son, and his eighty-two year old mother. I asked him why he was so determined to have us stay with him. Like I said, it really looked like he and the mayor were about to come to blows, and that didn’t seem normal somehow. This is what the man said. “I have always wanted to know about God, but I never felt that the dervish (holy man) was telling the whole truth. Two nights ago, the night before you came, I had a dream of a man who came to my village. God told me that this man would tell me what I needed to know about God. The next day you came, and told us about Jesus.” 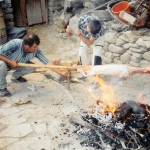 I told the man that God loved him so much that he sent His only son Jesus to die on the cross for him, and that He rose again from the dead for forgiveness of sins and to give eternal life. I told the man how awesome it was that God also showed His great love and mercy to the man by calling him through a dream to confirm it. As proof I told him the story about how we were not even supposed to be in his village. We were supposed to be in another village way over in another valley, but God had other plans for us. His plan was to send a message to him, the school teacher, through a dream so that he would be prepared to hear God’s Word. God also made sure that we couldn’t stay in our first village, but were able to find transportation to the second village no matter how dubious it was. That man had been prepared by God to receive His Word. That day marked a new life for not only the man, his son, and his mother who all prayed for Jesus to be their Lord and Savior, but also nearly the entire village prayed the same prayer based on that man’s testimony.

I think about all the plans our team had for that particular Jesus Film cycle, and how God designed and moved everyone and everything around so that we would be where He really wanted us to be so that a man and a village would hear the story of His love. His Holy Spirit had prepared them in advance so that when they heard, they believed, and when they believed they followed, and committed their lives to do His will. WOW!!! It’s spectacular to get to be even just a little part of God’s great plan to reach the world He created. A world He desires to reconcile to Himself through His son Jesus Christ.

May God Bless You until next time!